A fair number of books have been written on the birds of India. Many colonial-era books have been taken out of the clutches of antique book sellers and wealthy hoarders and made available to researchers at large by the Biodiversity Heritage Library but there are still many extremely rare books that few have read or written about. Here is a small sampling of them which I hope to produce as a series of short entries.

One of these is by M.R.N. Homer (Mary Rebekah Norris Holmer - 6 June 1875 - 2 September 1957) - a professor of physiology at Lady Hardinge Medical College who was also the first woman board member in the Senate of Punjab University and a first for any university in India. Educated at Cambridge and Dublin University she worked in India from 1915 to 1922 and then returned to England. She wrote several bits on the methods of teaching nature study, and seems to have been very particular about these ideas. From a small fragment, it would appear that she emphasized the use of local and easily available plants as teaching aids and she deplored the use of the word "weed". Her sole book on birds was first published in 1923 as Indian Bird Life and then revised in 1926 as Bird Study in India. The second edition includes very neat black-and-white  illustrations by Kay Nixon, a very talented artist who illustrated some Enid Blyton books and apparently designed posters for the Indian Railways.

A rather sparse Wikipedia entry has been created at https://en.wikipedia.org/wiki/M.R.N._Holmer - more information is welcome!

A scanned version of her bird book can now be found on the Internet Archive - https://archive.org/details/Holmer Holmer came from a Christian Sunday School approach to natural history which shows up in places in the book. Her book includes many literary references, several especially to R.L.S. (R.L.Stevenson). In another part of the series we will look at more "evangelical" bird books. 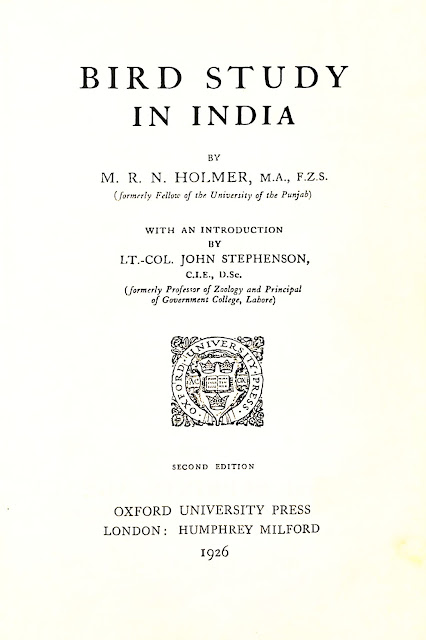