There seem to be quite a number of these around my place. Yesterday I spotted one with what appeared to be prey and looks like an ant queen (or drone?). 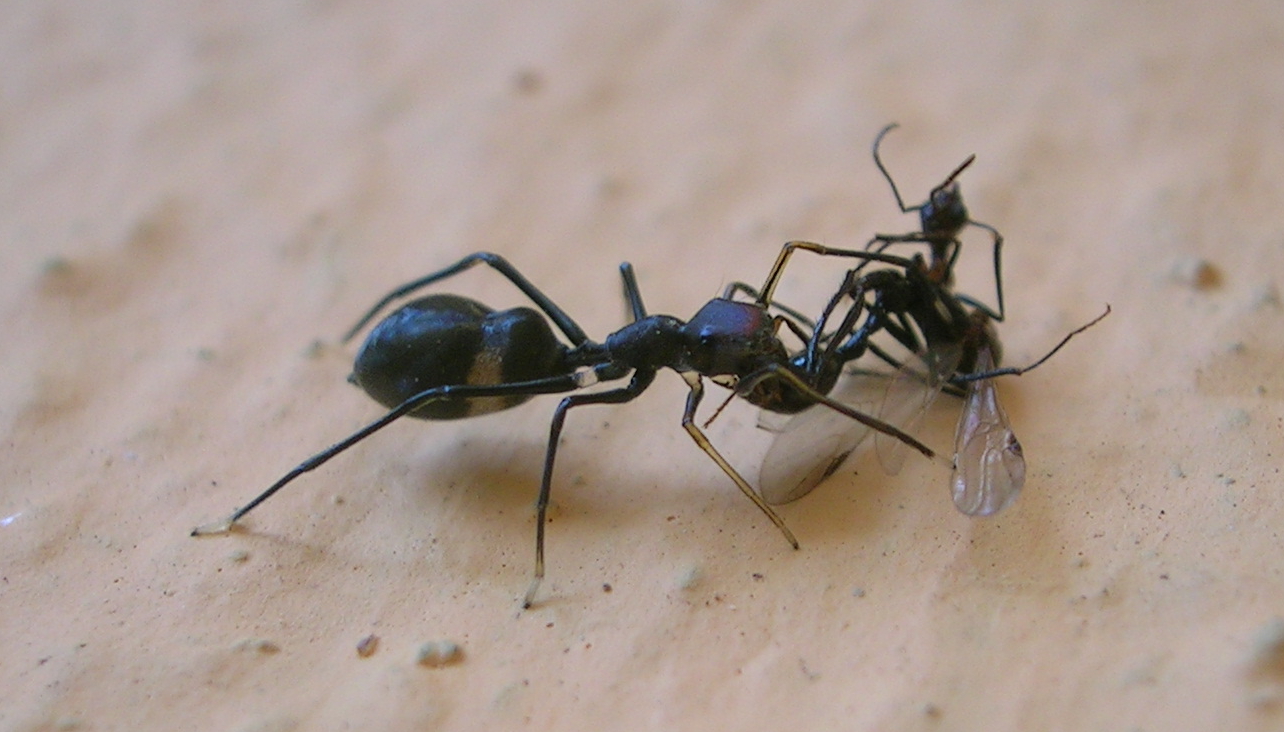 An online survey of literature indicates that they do not normally feed on ants!


My Nikon Coolpix E3700 (3.2 Megapixel) produces a sharper image than a Panasonic FZ100 (14 Megapixel) - but then the subject does not fill the screen in the new camera even at the macro setting and seems to need an extra lens to really utilize the sensor size. 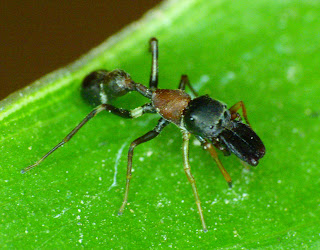 Posted by Shyamal L. at 4:57 PM No comments: Links to this post

Taking a day off from work, I went to a vision brainstorming meeting of the ICAR called "Agricultural Entomology for the 21 Century: The way forward". A friend had jokingly commented the previous day that the "vision must be blurred when you see through compound eyes"!


First the good things. The event was rather austere for an ICAR meet where a Director General presided. The crude opulence seen at institutions in northern India, at least in the past, was thankfully absent. The DG himself was amazing in being a careful and knowledgeable listener, having a firm footing on the ground realities and most surprisingly appeared to abhorr what used to be termed by IARI students as "makkanbaazi" (literally meaning a butter-smearing contest) - prolonged sessions of overt and crude flattery accompanied by displays of subservience by lower rank employees towards their higher-ups- in a hierarchical system where favours  are often needed to hasten action and perhaps to avoid punitive actions. To an outsider, such displays were/are clear symptoms of inefficiency. The inaugural session included a number of rituals that could have very well been done away,  particularly given that these were supposed to be scientists.


The session I went to attend was on systematics and taxonomy in relation to agricultural research. There were several ideas, all excellent. One was about ensuring a system of storing voucher specimens associated with publications. So when there was a crop insect outbreak, anyone working on that issue would collect a few specimens and deposit them in a suitable repository and quote the accession number in their publications relating to that insect. This would allow for any corrections to be made in future in case there was a misidentification. This is all too common - apparently the widely mentioned predator Chrysoperla carnea which was bred for biological control was not actually C. carnea. Some other examples exist as well but perhaps none as famous as "Drosophila melanogaster" which for the millions of pages of research on it is not strictly a Drosophila. 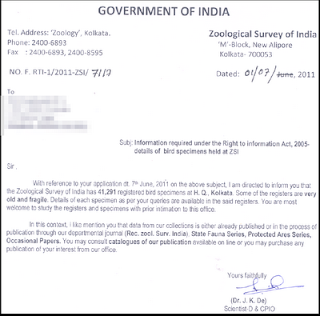 A representative of the ZSI suggested that the ICAR could digitize their literature and specimens. Excellent idea but rather ironic given that the ZSI itself has little interest whatsoever in doing anything that noble. A few researcher friends of mine recently decided to attempt an experiment with the ZSI and requested, via the RTI Act, a list of the specimens of birds in their collection along with the basic label data and they promptly received a response saying that such data was either stored in very delicate and ageing paper registers or had already been published. This is of course not only contradictory to the spirit of the Right to Information Act but also contradictory to basic scientific conduct. Indeed, the ZSI has a very poor scientific record. Just a random sample - a recently named the Indian subspecies of the Ceylon Frogmouth, "roonwali", after a ZSI director (actually a lot of taxa are named after their directors - zoological makkanbaazi perhaps) has a typographical error in the title (Ceylone instead of Ceylon!). That is probably the very least of their errors, indeed taxonomists of various groups regularly sink new names produced by the ZSI and BSI into the obscure dumps of junior synonymy and invalid names. If certain changes by the ICZN to the definition of "publication" happen, publications made in in-house journals produced by the ZSI (and BSI) could well become invalid for lack of peer-review. It is extremely unfortunate that despite the lack of transparency, knowledge and training, the ZSI has been empowered by the government to do such high-risk activities as Environmental Impact Assesments. Unless the journals and process of functioning of such organizations is made readily visible (ie, not requiring the filing of RTI requests and to merely be told that "the information exists but we cannot provide it"), it is unlikely to gain any of the credibility that they possessed in their early years. I have tried similar experiments with the BNHS in the past and they too are quick to deny help despite appearing to be helpful on their website. The BNHS however is more of a private club, although they are funded by the MoEF - thus tax-payer funds are used to subsidise the printing of a journal for an elite group of subscribers. This kind of problem is avoided in the US by ensuring that federal works are released into public domain and not covered by copyright. Such a far-sighted view is not taken by the Indian Copyright Act.


At the meeting, one participant noted that there were incorrect reports being published by some agricultural researchers. It was suggested by another participant that the director of the institute would vouch for their accuracy. This was precisely the problem that voucher specimens aimed to avoid. Human error can occur even in the best of situations and to rely on hierarchical structures to ensure scientific accuracy can hardly be considered good policy making. In 1995 an Australian entomologist, C. A. M. Reid  (Australian Journal of Entomology 34(4):318-318 doi:10.1111/j.1440-6055.1995.tb01347.x) went so far as to go on record to say that Indian entomologists had earned a reputation for unreliability. The need for evidence to be made available has been a constant endeavour in various sciences and now such a case is even being made for governance. The idea of type specimens in systematics arose from such a need for evidence. Today that evidence also requires to be in the public domain, accessible to all and readily so. A central collection would need one or more curators. Unfortunately a bad curator can be as good as none at all and there are all kinds of historical stories of how curators prevented advance and tried to gain monopoly as experts. (For a story of Edward Blyth and British Museum curators, see Brandon-Jones, Christine (1996). "Charles Darwin and the repugnant curators". Annals of Science 53 (5): 501–510.)

The ICAR has apparently invested enormous funds (apparently 7 crores! and just for setting up the software and perhaps hardware - with no actual provision for long term maintenance) in what is called "Agropedia" a kind of Wikipedia like system. Apparently in all of the last year, this much-touted project received as few as 5000 hits. (Compare the average 4000 hits per month for the Wikipedia article on the Sarus Crane! Even something with the charisma of a cockroach Therea petiveriana - gets about 200 views a month.)  Now one must really ask, why can't the ICAR actually contribute to pre-existing systems? There is Wikipedia, but that requires that scientists do not contribute original research. Of course one could argue that no original research should be done on Agropedia either, assuming that it is a secondary or tertiary source. I am reminded here of the statement of Doug Yanega, an entomologist at the University of California, Riverside who noted that he as well as everyone was better off contributing to Wikipedia than his university site as more people went to Wikipedia. One would expect original research to be published in peer-reviewed journals. A more real problem with Wikipedia is that articles on it need to reflect a global picture rather than an India centric view, a synthesis that may be well outside the ability of ICAR scientists. The future for things like Agropedia appear to be bleak, especially given the situation of other similar experiments like Citizendium. By not understanding that copyright is automatic and not releasing material for reuse - unlike the USDA which being federally funded produces most material (that which is not generated by contractors) - the ICAR essentially prevents future enhancement and adaptation for local needs. If the ICAR actually decides to release all its content under a free creative commons license, it would be a valuable resource that could be reused and enriched by a range of volunteers outside of the system and with little cost by way of salaries. It would be enhanced and enriched by people who do not need salaries to motivate them. Additionally systems like Agropedia run the risk of vanishing due to poor backup policies and lack of long term funding. Copies of the data cannot be made either as they are copyrighted and such massive data losses was noted by another meeting participant who contributed to a biodiversity database run by NCL Pune. This lack of long term support in database infrastructures is very disturbing. Systems such as www.archive.org and Wikipedia put in so much thought about these aspects. The license itself is made so that even if the original organization cannot continue, the project can be taken over by others and continued. Indeed releasing under public domain rather than the copyrighted system is a major safeguard for long term survival.

Another event at this meeting was the release of a publication with cytochrome oxidase sequences of a series of insects that feed on cultivated crops. Now, it is certainly a major advance for an organization like the ICAR but it is unclear why they should adopt using paper to print a series of DNA sequences. There is nearly no practical use for this publication (even the selfish motive of increasing citations for the authors would not be achieved) in its printed form although the sequences are potentially usable as they have been added to a major international initiative - in this case http://www.boldsystems.org .

If the ICAR really discussed things in the open there is a future for it and for Indians. A discussion in the open requires freedom and if that is suppressed, progress is prevented. It seems like I can comment on this since I have little to do with the ICAR, but can folks within the ICAR engage in debate and discussion over the Internet ? Perhaps they need to give it a try, and if they did, then Agropedia or some similar avatar of it may be feasible. 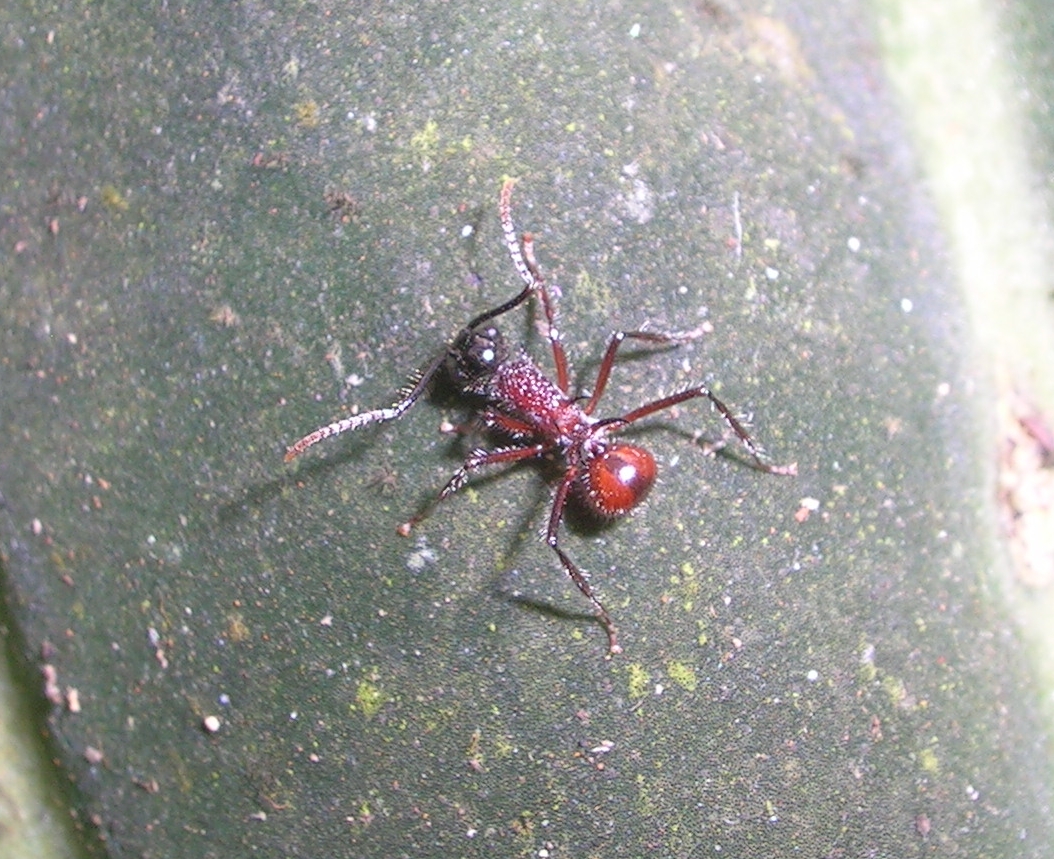 On a quieter note, some of us in the back-benches discussed entomology, and that resulted in my adding a new Wikipedia entry the next day, albeit a "stub" - Polyrhachis gracilior - and that did not cost too much!

Postscript: See this post How our heritage collections are managed by ZSI
also http://www.monbiot.com/2011/08/29/the-lairds-of-learning/

Posted by Shyamal L. at 5:07 PM No comments: Links to this post