A ramble on knowledge wrangling

A good ramble can branch off from a pretty tree, in this case Careya arborea - a tree that you can find in many Indian forests. The illustration on the right is from William Roxburgh's Plants of the coast of Coromandel (1919 - volume 3 - plate 218). The artist is not indicated but could well have been one of the Indian artists in the service of Roxburgh. The genus Careya is named after Rev. William Carey, a missionary at Serampore. Carey like many other clergymen of his time took a great deal of interest in science and among other things he founded a society for those interested in economic plants - the Agricultural and Horticultural Society of India - in 1820. A lot has been written about the life of William Carey but an old biography that is readily available on the Internet Archive makes an interesting read.

According to the biographer, Carey became a good friend of William Roxburgh whose wife was a daughter of a missionary. Roxburgh held Carey in high regard and out of respect suggested the naming of the Sal tree after him as Careya saulea. Carey protested and it seems like Roxburgh decided to name the sal after John Shore instead (Shorea robusta).

His introductory section in the first volume of the Transactions of the Agricultural and Horticultural Society of India is a very interesting read. He is very clear about the ends and the means of the scientific method, something that escapes too many professional scientists today. I extract the entire note below (readers would do well to substitute masculine adjectives and pronouns with gender-agnostic substitutes).

Prospectus of an Agricultural and Horticultural Society in India

THE advantages arising from a number of persons uniting themselves as a Society for the purpose of carrying forward any undertaking, is now so generally acknowledged, that to detail them appears almost superfluous. Not only must the experience and knowledge of an insulated individual be far less than that of a body of men, but his means for making experiments and conducting necessary operations, must be proportionally more circumscribed. A body of men engaged in the same pursuit, form a joint stock of their information and experience, and thereby put every individual in possession of the sum total acquired by them all. Even the mistakes and miscarriages of its members when recorded, prove a source of advantage to the body, while the labours of every one communicate new energy to his associates, and thus produce exertions which would never have been made, had they continued in their individual capacity instead of uniting as a body. Men of enlarged minds have been long convinced of the great advantages to be derived from Societies of scientific men, and have occasionally recommended them; yet scarcely a Society was formed before the commencement of the last century, and no one before the year 1640. Since the commencement of the last century, however, their advantages have been more and more developed, so that there is now scarcely an object relating either to religion, to science, or to the promotion of arts and manufactures, which is not carried forward by a Society formed for that express purpose.   ... 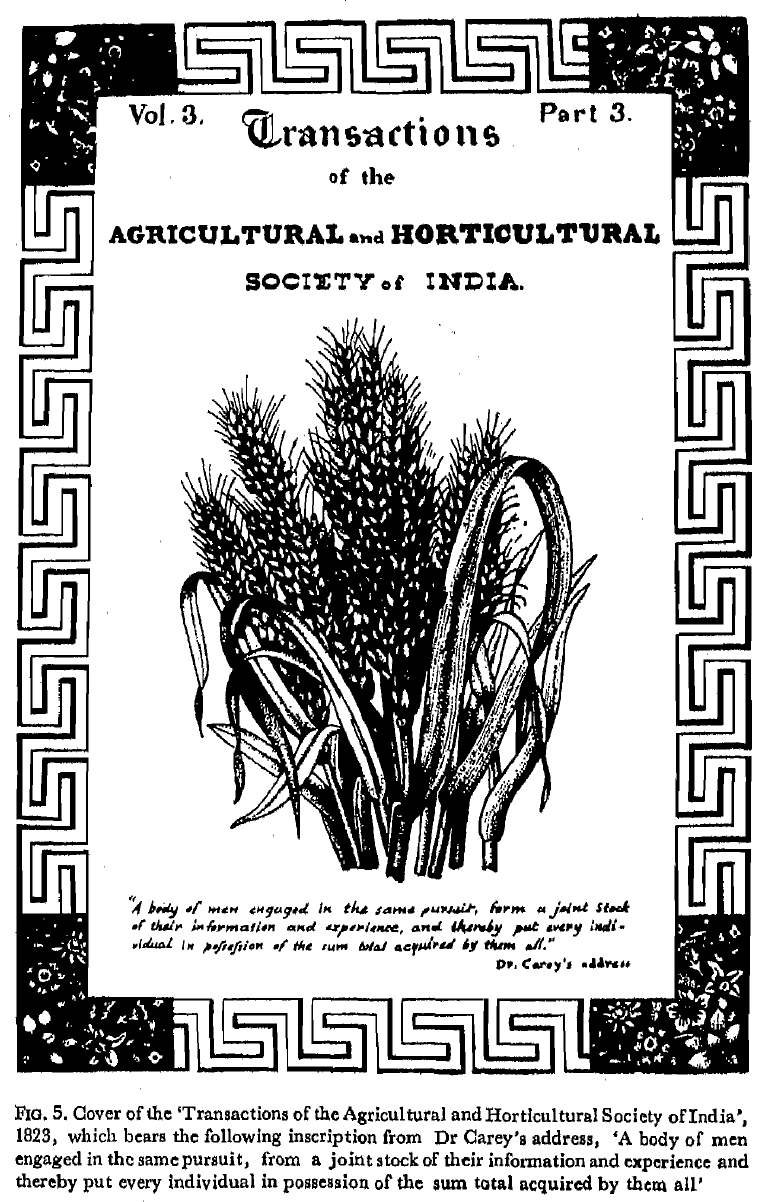 The clarity with which the role of the society and its journal are described did not get lost. The cover of volume 3 (and perhaps later issues) of the journal actually carried the quote - " ... a joint stock of their information ... put every individual in possession of the sum total acquired by them all". In fact I found the cover and the quotation highlighted in M.S.Randhawa's History of Indian Agriculture, a work which also clearly demonstrated to me that the ICAR did in the past have knowledgeable people with a clarity of vision.

Other scholarly societies came up with essentially the same purpose - the Bombay Natural History Society for instance notes in their first journal issue that:

It was founded on the 15th of September 1883 by seven gentlemen interested in natural history, who proposed to meet monthly and exchange notes, exhibit interesting specimens, and otherwise encourage one another.
...
... One other matter remains to be noticed. No public library in Bombay affords much assistance to the naturalist, and the absolute necessity of having a good library of their own forced itself on the attention of the members of the Society...

Of course, well before this were claims about dwarfs standing on the shoulders of giants! It is interesting that enterprises soon lose sight of their original aims and begin to concentrate on tangential efforts related to the means rather than the ends. Organizations begin to bloat into bureaucracies that seem to have have little to do with their original aims. The costs incurred in maintaining the systems increases and the actual output doesn't. People begin to set up hierarchies of positions and the game to rise within them begins. And the potential for growth is definitely greater in non-core activities because the sum of tangential courses will support so many more people than the original path that founders think up. Today a group of people interested in a subject merely need to join an Internet group or email list and that for all purposes is a scholarly society. It produces its transactions on a continuous basis. Old style scholarly societies can either move towards such systems or vanish into obscurity.

Given the antiquity of the vision it is not surprising that we still are attracted to Lennon-esque visions like Jimmy Wales' - Imagine a world in which every single person on the planet is given free access to the sum of all human knowledge. A friend recently emphasised the difference between the spirit of this idea and how it differed from literal interpretations and pointed out that there are enough kinds of knowledge that cannot be transmitted (for example tacit knowledge includes such things as the ability to skate, bicycle, balance or swim ...). Literal interpretations will of course not hold up and some researchers have gone to inordinately great lengths to demonstrate this (for instance to show that oral, cultural and traditional knowledge are not captured on Wikipedia - or indeed any other fixed medium). Why has this old idea not yielded more?

Now even though visions and spirit are clear - methods that work in one epoch may not be the best for another. The whole idea that scholarly journals ensure a higher quality of knowledge has now come under scrutiny. Ownership of printing presses is no longer needed for the spread of ideas. An entire industry that lives off the publication and gate-keeping of knowledge has clearly shown itself as parasites of the original spirit of scientific enquiry. But what about the profession of science itself? What about all other professions? Why would a "lawyer" be any more qualified than anyone else? Why would one need to follow an archaic law made by Colonial powers? Why can't questions be asked?

A general suggestion has been that Open Access would cure science of many ills and rid itself of the publishing parasites. Peter Murray-Rust wrote an excellent essay that questioned ideas of Open-ness. Murray-Rust identifies several key principles of open-ness but I think this can be further reduced to just three ideas - which can appear at some level as contradictory (esp. Meritocracy and egalitarianism) but can be compared with analogous ideas in evolutionary theory. Evolutionary systems do not have centralized command (ie. not designed)

If one really took this path - we should question not just journals and publishers but also the idea of organizations and membership affiliations. Radical thinking involves separating the ends and the means in an enterprise. One interesting idea in software development, which the open-source movement implicitly makes use of has been the idea of "Extreme Programming" (XP) which proposes that good ideas should be taken to their extreme and applied continuously or as intensively as possible. XP principles lead to the idea of continuous testing, regular builds, continuous discussion and continuous improvement. One could apply the principle in an office and ask for instance about the need for meetings and come up with propositions - if meetings were indeed good then why not hold meetings all the time - i.e. over the Internet via a suitable electronic discussion system. What would we get if we put these principles in areas such as governance - why do we elect representatives? If representatives were good, then make everyone a representative. After all the idea of representatives was something needed in an older time with communication problems. One could go on and ask if we really need a parliament, elected representatives holding private sessions. Why cannot everyone (artificial boundaries like nations can very well be disregarded in most cases) see problems, propose solutions while reducing decision makers and executives to a minimum. Decision makers would be the few that are elected and would work in the open keeping everyone informed of the decisions taken, be open to questions answering them in the open and so on. All of this could be continuous and asynchronous processes, not requiring simultaneous presence of participants in the same place and time. Sherry Arnstein introduced the idea that participation can mean a whole spectrum of levels (now called Arnstein's Ladder) and very few participatory systems consciously seek the highest forms of participation and too many "democratic" organizations still live at the level of manipulation, placation and tokenism. Rethinking ideas from the bare basics is something that often improves systems. New methods provide new opportunities that may require one to rethink the original aims rather than merely replace an older component. A system that is trapped in a local optimum needs to be shaken out of stability for it to evolve a path to a stabler solution.

PS: And a timely essay from the opposite side by Evgeny Morozov
I seem to have missed Peter Murray-Rust's original post which is compulsory reading ... and of course Sherry Arnstein's ladder of participation
Posted by Shyamal L. at 7:17 PM No comments: