When ornithologists plumb the depths of the seas
On the French national library, there is a fragment of a book The port and prospect in and near the river of Mangalore ; A prospect of the Mulkey rocks ; A prospect of Pidgeon Island published somewhere in the 1700s it is part of a collection belonging to the cartographer d'Anville. Pigeon Island is what is today called Nethrani Island, known to be one of the best and most bio-diverse coral reefs close to mainland India and one that has hardly been carefully examined - mainly because the island is used for target practice by the Indian Navy who bomb it periodically with torpedoes. It is also said to have the world's highest density of nesting White-bellied Sea-eagles.

What caught my attention was the information given to navigators - "your Soundings green Ooze." Trying to make sense of this phrase led to an examination of navigation practices in the period. Sounding is a word for finding the depth of the sea-floor and it comes from ancient times, well before sounding actually was done using sound - with sonar, reflecting sounds off the sea floor and calculating the distance based on the time taken for echoes.

Sounding in the old days were done using "sounding leads" - special blocks made of lead or other heavy metals (incidentally the plumb in plumb line - comes from plumbum, Latin for lead). The block was lowered down the side of the ship and had a cavity at the bottom that could be lined with tallow, bees-wax, soap or other sticky material or a small saucer at the end that collected a sample of the sea floor. The sample that came up would tell something about the nature of the sea floor, it could be sandy, rocky or, it could come up with foraminifera ooze - and in which case it would go into the log books as sticky green ooze. Navigation on rivers was perhaps a bit easier and made use of a sounding pole with graduations. They too had a cup at the end that allowed sampling of the floor. (The call of "Mark Twain" was made by Mississippi river pilots who found the water depth to be two fathoms.)

Nautical charts routinely indicate seabed types and this tradition was mainly to examine spots for anchorage and not so much for scientific analysis although they were used as indicators for good fishing and for identifying the nature of currents based on the distribution of silt deposits at the mouths of rivers. With the establishment of marine surveys, a more systematic sampling of sediments was undertaken with a view to find larger scale patterns. Drilled cores of the sea bed in the Arabian Sea allow for examination of the deposition of the ooze over time. One of the patterns is that the ooze deposit is correlated with the Southwest Monsoon. It may be related to the flow of nutrients with rainwater runoff and the resultant growth. The data from these cores have been used as proxies to understand long-term patterns in the monsoon and its strength. For an example of the modern techniques available and what they can reveal - see Schmiedl, G., and D. C. Leuschner (2005). But let's get back to an earlier age.


A history of the Indian marine surveys has been written by Clements Markham (but it is worth remembering that he can be unreliable at times - as in his Cinchona history). The first surveys by the navy of the East India Company focused on ports and navigation.  The trend was continued until the ending of the "Indian Navy" (not to be confused with the post-Independence organization) in 1862. In 1873, a Marine Survey Department was established. The Department was headed by Commander A Dundas Taylor and included Staff Commander J.H. Ellis, RN as deputy superintendent. It also included Dr J. Armstrong as surgeon and naturalist. The marine surveys included as part of their study, the mapping of depths, and the examination of marine organisms as well.

One of the early survey assignments for Commander Ellis was aboard the Clyde. In the General Report of the Operations of the Marine Survey of India from the Commencement in 1874, to the end of the official year 1875-76 by Dundas Taylor we read on page 7 that they had an unlikely passenger on board in 1875.

The whole thing about measuring a meridian distance between Pigeon Island and the Laccadives (Lakshadweep) and remaining there for a fortnight seems like a clever ploy initiated by Hume, the Secretary to the Government of India, to hijack the government machinery for his ornithology.

Hume's own note published in his Stray Feathers is a good read:

Reading through Hume, it is clear that he has all the background needed to do his job of identifying locations for lighthouses. He knows for instance the location of the wrecking of the Chaldea in the previous year. He takes an unusual interest in the plant life on the islands during this trip. Strangely he does not mention much about the bird-life of Pigeon Island. He notes the numbers of sea-eagles nesting on the Vengurla rocks that they encounter earlier off Goa. Hume writes:


One object that I had in view in making this trip was to ascertain whether or not the Laccadives were separated by a deep trough from India—a matter which up to this time had remained uncertain.

I had, therefore, indented on the Bombay dockyard for deep sea line, and they supplied some five or six thousand fathoms of splendid looking line. Our Captain, an old Porcupine man, entered most cordially unto my views, and soon after we left Bombay, took the line in hand and began testing and marking it. To our dismay it soon appeared that the line was in many places rotten. Whilst we lay at Pigeon Island, the Captain had a lot of it carefully picked over, all bad pieces picked out and   the  good  carefully  spliced  together.

One really wonders why a marine survey vessel did not have the necessary equipment for sounding already on board. ["Porcupine man" apparently refers to the fact that Ellis worked on the HMSS Porcupine - see this which puts him aboard the Porcupine around 1873 and has nothing to do with the skin disease]


Anyway, what this does make clear is that Hume would have read the work of Alfred Russel Wallace. Wallace's 1863 paper was communicated to the Royal Geographical Society by Clements Markham and Markham would have been closely associated with Hume during the course of the cinchona work under the aegis of his Department of Revenue, Agriculture and Commerce. Huxley had named it the "Wallace Line" in 1868. (Hume had of course read Darwin and Hume's copy of a first edition of The Origin of Species is at the South London Botanical Institute) Hume was also in touch with the geologists of the Geological Survey of India from the time of Stoliczka. Richard Lydekker had joined the GSI in 1874 and in 1879 Hume got him to write about the skeletal structures of birds based on his training in paleontology. Interestingly Lydekker found another now eponymous biogeographic delineation of Australia in 1895. At the end of the Laccadives trip report, Hume includes three bathymetric charts in this issue of Stray Feathers - of the Laccadives, Cherbaniani Reef and Kiltan Island. It is rather interesting considering that printing illustrations was so much of a problem in those times. He also spends considerable space in exploring the origin and geological structure of Betra-par - whether it has a rocky core or if it is entirely formed out of coral reefs. He had samples of the soil tested by the GSI. He collected molluscs that were identified by Nevill of the Indian Museum. Plant specimens were also collected and these were examined by David Prain.

The engine on the Clyde broke down on February 21 and attempts were made to get it to sail but tacking was not possible as it lacked a keel. With great difficulty they reached Thoothukudi where Hume exited to make his way to Madras but with some travels on the way. Incidentally, the Gunboat Clyde was manufactured by the famous Wadia family (which produced the geologist D N Wadia). The builder was Rustomjee Ardaseer, son of Ardaseer Cursetjee, the first Indian Fellow of the Royal Society. Commander Ellis' report includes the rest of the saga. (The Clyde 1857 was a 300 ton steam gunboat capable of carrying 18 guns and had a 60 HP engine - see )


At last we made Tuticorin, and I had had enough of the old "Clyde," to which I here bade farewell, devoting the rest of my leave to Southern India, the Pulneys, and Neilgherries, of which I need say nothing here.

I fancy that he would have visited his good collaborators S.B. Fairbank in the Palnis, Margaret Cockburn in Kotagiri, his collector W R Davison in Ootacamund, and his cousin Edward Balfour (who left India in 1876) in Madras before taking the train back towards Calcutta or Shimla.

We tend to think of most of the colonial ornithologists as mere collectors making use of their presence in a particular location but these and other examples from Hume's work clearly indicate that he had underlying theories and sought to find evidence either in support or against them. This is especially useful as a lesson for beginner birdwatchers - Max Nicholson wrote in his Art of Birdwatching - "One cannot observe without a theory, and what seems the simplest of ornithological tasks - to go out of doors and look out for something worth recording- is in reality one of the hardest ... It is a mistake to imagine that complete impartiality and freedom from preconceived ideas is the qualification for the perfect observer. The cow has a remarkably open mind, yet it has never been found to reach a high degree of civilization." Ernst Mayr is supposed to have expressed a similar idea which Joseph Hickey recalled as "everybody's got to have a problem." Mayr expected even ordinary bird enthusiasts to have big biological questions at the backs of their mind so that they might make more critical observations.

The idea of soundings and sea depth measurement to examine continental boundaries and thereby bio-geographical boundaries did not stop with Hume. He seems to have influenced his collector W R Davison as well. When Davison went on to take up a position at the Raffles Museum in Singapore (the Straits Settlement in those times), he decided on delineating his area of specimen collecting, which included numerous islands, using a cutoff at a distance where the sea floor depth exceeded 50 fathoms (Professor Kevin Tan of Singapore in his history of the Singapore museum has many biographical details on Davison including his tragic death - see Tan, 2015).

(Actually posted as a message on the list - bngbirds on 30 Sept 2013) Hickey mentioned above was himself inspired by Nicholson and wrote a book called the Guide to Bird Watching as part  of his Master's degree! This book inspired a Mrs M.D. Wright, wife of a forest officer in India at Dehra Dun. She counted birds and wrote a remarkable piece in the Journal of the BNHS in 1949. She also influenced Dr Joseph George who conducted studies on drongo numbers and published many notes in the Indian Forester. Dr George went on to establish a lively group of bird-watchers in Bangalore.

Interestingly, Salim Ali seems to have glorified the idea of the "unbiased observer". The debate around having paradigms or frameworks for observation has obviously taken place before and I would subscribe to the view of Goodin (2006) that allowing for a multiplicity of biases is more helpful that claiming to be unbiased, which really is a state that is unachievable. A truly unbiased person would be taking a random walk, never reaching any specific destination! 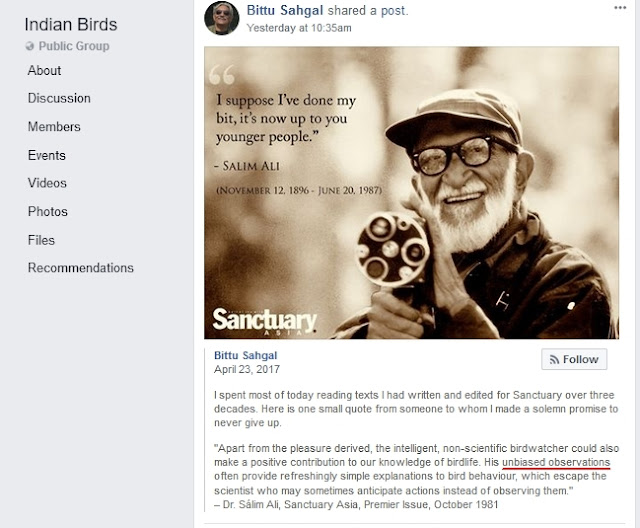 Further reading
Posted by Shyamal L. at 3:29 PM No comments: Links to this post