What?! Those two words appear to have little to do with each other,  but they were at the heart of some conflict, the conflict between geology and religion in Europe. For outsiders in places like India, this conflict is hard to understand and is not a significant part of the public understanding of science.

I came to read up about isostasy, thrown off on a tangent from a research trajectory that began with something linked to Bangalore. That research ramble included forays into the life of William Lambton, who began experiments on the Great Trigonometrical Survey at Bangalore, the discovery of strange errors in surveying and Himalayan geology. Along the way I also noticed characters of interest from a recent trip to Italy. I realized that we know so little of the evolution of science and the history of tussles between religion and science. This seemed especially to be a gap for those of us living in the non-Christian world where science and fiction meld into each other.

Our story begins with the Earth. Several early scientists reasoned that the Earth must have been a piece of irregular material which was either hot and liquid or made up of bits that broke off from a bigger solid and behaved like a fluid over time to rearrange itself into a nearly spherical form. One early scientist in particular did the mathematics of it and figured out how much it would bulge at the equator on account of its rotation about an axis. Understanding the shape of the earth was an important part of navigation and that also translated to questions of Empire and supremacy. The man we are interested in, who wrote a treatise on the physics and geometry of the earth, was a brilliant mathematician, a Cambridge Wrangler (number 3 for 1833), who decided to take up a job as a clergyman in India just to have the free time and peace of mind to pursue mathematics. He was so good at his work that he was nearly appointed a Bishop. After the orders were passed, they were rescinded in the light of the 1857 revolt and the powers that be instead chose George Cotton to become Bishop Cotton, after whom many schools in India are named. Alumni of that school would probably have been far prouder if their school had instead been named after the Archdeacon of Calcutta, John Henry Pratt. 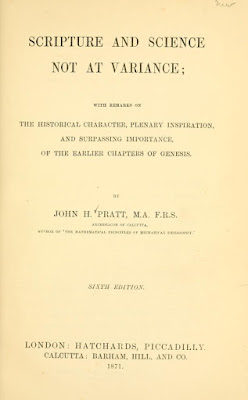 Pratt was such a brilliant applied mathematician that he was would regularly be sought to solve problems faced by engineers and officials in the government. He would evaluate the strength of metal bridges, arches and trusses. As a member of the Asiatic Society of Bengal, he attempted to put a date on ancient Indian writings on the basis of star positions. Pratt's biggest area of research was however on the shape and structure of the Earth. Early on, Archdeacon Pratt saw mountains as a problem! The problem really was that they shouldn't exist if one assumed the fluidity of the Earth. Assuming the fluid nature of the earth and the time available for the earth to become nearly spherical, the irregularities on the surface should be far smaller. Isostasy deals with the forces that resolve that problem.  Pratt was brought to think about mountains more deeply when Surveyor General Andrew Scott Waugh  (who succeeded George Everest) came to him with data that showed an odd pattern on errors in the estimation of the heights of peaks in the Himalayas. The peaks appeared to be higher when measured from far away and when measured from closer up they seemed to lose some of that height. The source of the problem was already known as the errors were lower when star references were used but the errors became great if theodolites were used in computing angles. Theodolites use plumblines to define the vertical and it was known that plumblines lean towards mountains due to their gravitational attraction. So the angle from downward vertical defined by the plumbline to the top of the peak of a mountain is less that what you would measure if the plumbline actually pointed to the true centre of the earth.

Now Pratt looked at the data more carefully and did some calculations and found that this plumbline attraction was not as great as it ought to have been. His estimate was based on volume and density for the Himalayas. Since it did not match up he decided that the density of the Himalayas that he used must be incorrect. He then suggested the idea that below the mountains, the material was much denser and that the mountains rose like fermenting dough, fluffy and of lower density and resting on a denser base. That is isostasy (and there is a standard model in geology named after him) but Pratt was a clergyman and his other big problem was that anyone looking at geology could not fail to find fault in Christian religious teaching. Pratt was deeply disturbed and he wrote a book called Scripture and Science not at Variance in 1856 and it went through several editions. That religion and science conflicted long before Darwin is often forgotten today. Before Darwin, the central issue was the age of the earth. Calculations were attempted by many and they all differed from scriptural views by several orders of magnitude. Part of the problem in this really was that the ones who made these estimates were not "scientists" in the modern sense of the world - many of them were in fact clergymen! These were the same clergymen who had taken to natural theology / natural history in the tradition of John Ray's advice to contemplate on the Works of Creation on Sundays. The trouble was that all this contemplation led to the growth of geological knowledge which left the clergymen-scientists deeply conflicted.

When early Europeans saw mollusc fossils on the tops of mountains, they were quick to use it as evidence of Biblical floods. When I saw a few fossil molluscs, in the wild so to speak, on top of a mountain near Lake Como, I was filled with ecstasy. I put myself back in time by a couple of centuries to imagine what I might have made of it. Two centuries ago there were so many ideas floating around - there were competing theories of earth origins. Some saw from the evidence of volcanoes and igneous rocks that the earth may have been hot to start with - the plutonists - while others favoured the idea that igneous rocks were born under water - the neptunists. I suppose neptunism was more in line with scriptural ideas. Before this there were other geological debates including that between Catastrophism vs Uniformitarianism. It is easy to see how evidence and interpretation played such a big role in the development of science. I had read and researched about at least a couple of Italian clergyman-geologists (or naturalists) who had lived in the same district that I visited. Northern Italy produced Antonio Stoppani  (a force behind the natural history museum at Milan) and Ermenegildo Pini - subscribers of the Concordismo, an Italian movement to resolve the conflict between geology and religion. This Italian school tried to settle the matter by suggesting that the scriptures were not to be read so literally. Stoppani encouraged the study of geology by everyone. He wrote a popular book called Il Bel Paese (the beautiful country) that demonstrated how a knowledge of geology enhanced one's appreciation of the country. It was a best-seller and went into numerous editions and was a standard fixture in schools for a long time. A famous cheese manufacturer named his brand of cheese Il Bel Paese and that brand is now far better known!


People who could see geological evidence had the option of keeping their ideas to themselves. Wealthy people were probably more capable of expressing ideas freely as they had less to fear. Darwin had seen the case of the Devil's Chaplain in his youth and lived in fear of upsetting religious powers. It was the support of people like  Charles Lyell that let him publish. I have wondered often if the amateur-scientific establishment in colonial India, distanced from such social tensions lived with less fear. I have not seen an analysis of  such tensions or the lack of it in the  contents of the journals of learned societies in India. 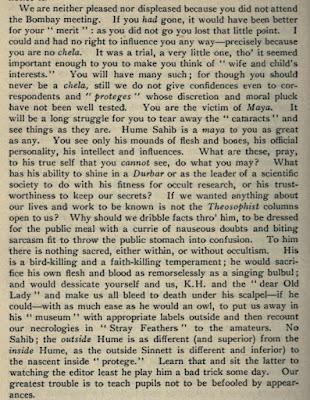 I know however of one ornithologist who was influenced by the development of secular ideas - A.O. Hume. Hume learned a bit of geology under Gideon Mantell, a friend of Charles Lyell. He came from a family with a radical political affiliation and clearly did not subscribe to many ideas of Christianity. He sought spirituality, something free of the politics of religion, in the Theosophical movement founded by Madame Blavatsky. Sadly he found that organization too corrupted for his taste. At one point he sought to have Madame Blavatsky and others removed from the Theosophical Society for trickery and dishonesty! He earned the ire of the other members when he tried to define the aim of the Theosophical movement in a book. A person signing "K.H." (the Koot Humi a pseudonym possibly of Blavatsky herself) wrote: "I dread the appearance in print of our philosophy as expounded by Mr. H. I read his three essays or chapters on God (?)cosmogony and glimpses of the origin of things in general, and had to cross out nearly all. He makes of us ''Agnostics''!! ''We'' do not believe in God because so far, ''we have no not have proof'', etc. This is preposterously ridiculous: if he publishes what I read, I will have H.P.B. or Djual Khool deny the whole thing; as I cannot permit our sacred philosophy to be so disfigured...."

Any readers residing in London may be interested in a talk on Hume and Theosophy on 19 September 2016.

I am hoping to visit Hume's home, Rothney Castle, at Shimla in early August 2016 and my next post will be on that topic.

Note:A bit of amusement for those who know me!
Postscript: 24 July 2018 - visited the Sea Point contact zone at Cape Town, where Darwin pondered over Neptunism v. Plutonism.