Flies for a rainy day

(Photographs and text by L. Shyamal)

It has rained quite a bit the past few days in Bangalore. Mealybugs took their toll in the dry spell, killing off a papaya in a strip of land that urban dwellers think of as a garden. The fallen rotting stump of the old papaya was wet and was the arena for these dancers. They stand erect on their long legs and are aptly called stilt-legged flies.

It took me some effort to identify these flies to family - I initially thought they were Micropezidae but a little enquiry led to learning something - the usual thing actually - i was mistaken. They were Neriidae - and as a consolation, they were indeed at one time considered a subfamily Neriinae within the Micropezidae. Anyway, there is a lot happening among these flies. They stand on the fallen log, run around in spurts, chasing the other guys. The big guys show off by standing tall and when any challenger appears, they try to prove who is the boss. And then when miss Neriidae appears, he walks protectively over her and she walks under the cage formed by his legs until she allows him to copulate. After this, the male continues to follow her, sometimes well until she oviposits (sorry, lays would be simple English, but some old habits persist).

The centres of most aggregations are females. You can tell them by the lower profile that they adopt and their more bulging abdomens. The ovipositor of the females and the aedeagi of the males are also usually apparent. When a male gets a position near a female, other males dart in and out, trying to take over the position. The defensive male only makes quick darts and continues to stay near the female. Sometimes two satellite males will take their fight for dominance to a position well away from the females and the food/oviposition resource. The initial display involves the use of quick and alternating left and right wing flicks. This is followed by quick steps in the direction of the opponent. The high intensity conflict involves the two males standing face to face and using their mouth parts (yep !), legs and shoulders placed against each other and the aim seems to b 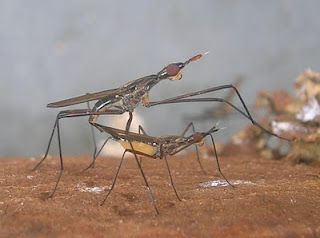 e for the dominant individual to wrestle the other to a lower level. It involves rapid movements and only high speed macrophotography may do justice to documenting this behaviour. On a secondary note, it appears that as usual, most of the entomological literature on the Neriidae is purely of a taxonomic nature and it seems few have spent much time observing these extremely interesting flies in life. Being mainly tropical, one of the best insect books (BDT as it is called), which is American centric, spends just a few sentences on the family.

Both the Micropezidae and the Neriidae are slender and long-bodied flies. The former however usually have a much reduced first pair of legs. These are often waved in front of them like antennae and in some sense they can appear a bit like an ichneumonid wasp looking for its victim. In the Micropezidae, the base of the forelegs (the coxa) is somewhat separated from the hind pair of legs. And the hair-like arista on the antenna arises at the tip in the Neriidae but is dorsal in the Micropezidae.


As if to help me, I found a bit of bird dropping on the ground that had been partially dissolved by the rains. Feeding at this feast this was a "typical" Micropezid fly. With long legs, both the Micropezids and Neriids need to tip down to get their mouthparts to the food and these giraffe-like flies are quite alert during feeding and are easily disturbed. This Micropezid took off from its "copropizza" and landed on a leaf nearby and allowed me to take a couple of pictures that show the key features. The picture is not of too high a resolution, limited by my humble compact digital camera (an old Nikon Coolpix E 3700 that has contributed well to public domain). The Micropezids have shortened forelegs and they wave them rapidly in front of the heads giving one the impression that they are really antennae, especially resembling that of the small parasitic wasps. You can almost see in the picture on the right, the fly rubbing its hands in glee perhaps !

I am hoping to check out the fallen papaya in the coming few weeks for the larvae and pupae of the Neriid fly. The last instar larvae have the curious ability to escape from disturbances by making leaps.


In writing this little note I have had the benefit of identification help from Professor C A Viraktamath at the UAS, Bangalore. I have also been much enthused by the diptera.info forum and of course Wikipedia. I have added some of these images to Wikipedia and have attempted to improve the referencing of the article on Neriidae. It is quite surprising that there are few available resources that do justice to these and other critters that live right next door.

An identification has been made as Telostylinus cf. lineolatus (courtesy Dr Kumar Ghorpade)
Posted by Shyamal L. at 12:34 PM 3 comments: