In the last week, I have been examining some historic pictorial evidence of the vegetation atop Nandi Hills . It forced me to research the people behind the pictures. The key person involved was Colin Mackenzie, who had a strange interest in the history of mathematics and worked on a biography of John Napier, the man who is considered to have discovered (or invented?) the idea of logarithms in arithmetic computations. One of Napier's kin wanted Mackenzie to study the possibility that logarithms were in use among Hindu mathematicians. When this sponsor died, another relative bought Mackenzie a commission with the Madras Engineers. Setting off from the Outer Hebrides ("Farthest Hebrides"!), he arrived in Madras on 2 September 1783 and was never to return home, dying in Calcutta on 8th May 1821. Working in the army during tumultuous times, he quickly forgot the biography project, but retained an interest in antiquities and kept careful notes, had illustrations made and collected artefacts as he travelled around southern India. During the campaign against Tipu Sultan, he had illustrations made of the scenery around and among them is a picture of "Nandidrug" made in 1791 probably by Captain Thomas Sydenham. His interest in surveying the land and collecting information led to him being chosen for the new position of "Surveyor General".

[A side effect of the research was a bit of improvement of the Wikipedia biography of Colin Mackenzie.]

The picture appears to have been drawn from the adjoining hill (which has some trees) and the painting may have some aspects exaggerated and has many inaccuracies. The top is however shown to be largely devoid of any vegetation. The overhang to the right side of the picture just beyond the end of the lower and second line of fortification exists but is much less prominent.

Colin Mackenzie is somewhat special in his use of native interpreters. Early in his career, he was introduced to Kavali Boria, a "Brahmen" from Andhra with linguistic abilities that included the ability to read old Kannada script. Several other brothers and family members were part of his team, and after Mackenzie's death, the third brother Ramaswamie went on to publish books in English and these include perhaps the first Indian cookbook written in English (Pakasastra, translated from a book in Telugu by a Saraswati Bai) ! A pity this out of copyright work is not available online.

Mackenzie appears to have been quite accurate with his descriptions and the illustration of Nandi Hills is rough but still identifiable. The one shown may have been redrawn from a field sketch and lost some detail in the copying. Apparently a course in drawing (esp. of topography) was part of military training at the Royal Military Academy at Woolwich (Dias, 2013). The lack of trees on Nandi Hills is also mentioned very specifically by Surgeon C. J. Smith (see my earlier post "Perfect Alembics" for the full text).

The metalled road that leads up Nandi was set up only after 1923 according to the memorial stone at the entrance arch. It appears that some of the fortification was removed in the process (as it appears by comparing with the 1799 image). 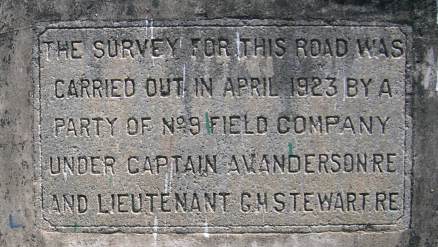 It is widely claimed that Eucalyptus was first introduced in India in the Nandi hills by Tipu Sultan somewhere between 1782 and 1790. (Where did he get the plant from?). The Eucalyptus trees at Nandi Hills are among the largest trees in the Bangalore area and many of them show a surprisingly different kind of bark, not peely, smooth and white as elsewhere but fissured and cork-like bark. Surgeon Smith's claim that clouds covered the adjoining vegetated hills but not Nandi is also not something that is seen. In fact on one overnight stay in summer we noticed that the tree trunks are all covered in a thin film of flowing water each morning. This condensate is what makes the little forest patch on Nandi look so much like the Western Ghats, trees covered in moss and epiphytes. It has also been adopted by a wide range of birds that one would find more regularly in the Western Ghats - the Nilgiri Wood Pigeon, the odd Malabar Whistling Thrush, the Orange-headed Thrushes, the Pied Thrushes, the summering(!) Small Sunbird and so on.

There is little doubt then that Nandi Hills qualifies as a cloud forest. The question is, can one have accidentally been made in the course of a little under 200 years? Considering that the adjoining hills have not grown in a similar way, does the Eucalyptus itself have a role here?

PS: Is something similar happening at Mount Sutro in San Francisco ? http://mntsutro.com/

March, 2016: It appears that the first person to move eucalyptus plants (probably E. globulus) out of Australia was  Jacques Labillardière. Labillardiere was surprized by the size of the trees in Tasmania. The lowest branches were 60 m above the ground and the trunks were 9 m in diameter (27 m circumference). He saw flowers through a telescope and had some flowering branches shot down with guns! His ship was seized by the British in Java and that was around 1795 or so and released in 1796. All subsequent movements seem to have been post 1800 (ie after Tipu's death). If Tipu Sultan did indeed plant the Eucalyptus here he must have got it via the French through the Labillardière shipment.
PS: Two of the Eucalypts at Nandi Hills were cut down by the Archaeological Survey of India + department of horticulture in 2019 - this gives a great opportunity for research on climate with someone having access to the appropriate tools and techniques. We tried contacting people at IWST and other places to collect slices of the trunk for any future research but it seems nothing came out of it. 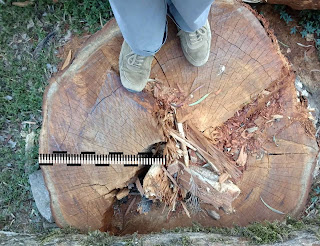