I was looking for some Wikipedia articles tagged under the umbrella of WikiProject India - I was looking for poor quality articles to use in a little training exercise and of course there was no shortage there. Since the article list was alphabetically sorted, I espied the entry for Anaconda. Now why should that be related to India when the snake does not even occur outside of South America? Turns out that the word for the South American snake may have never been used in South America and that the word somehow emerged out of Sri Lanka. The material on the Wikipedia article was not entirely incorrect but the sources it cited were really poor quality and dubious and there was excessive emphasis on one theory - that the word anaconda was derived from the Tamil roots anai and kondra meaning "elephant killer".

As always, a good researcher needs to find better sources and so a check for better sources for etymology and associated information led to a fairly interesting pursuit. The first port of call was that incredible and most entertaining piece of scholarship - the Hobson-Jobson and Henry Yule had practically sorted it all out in two and a half pages of in depth research but curiosity got the better of me and I decided to fish out the sources he used and found some others too.


Charles Owen (1742) An essay towards a natural history of serpents has this entry which expands on Ray and cites the source as D. Cleyerus (=Andreas Cleyer) which seems to be fairly good fit for the rock python (except for the length which might be based on stretched skins or imagination). 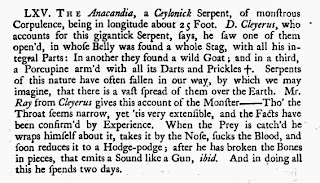 And The Dublin Penny Journal for 1834-5 has a long entry explaining the boa constrictor and anaconda. 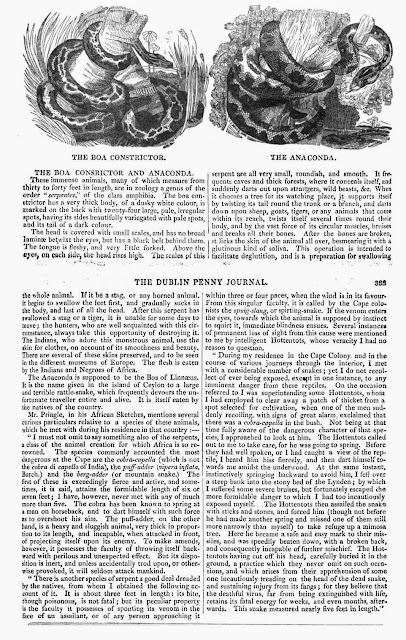 Frank Wall, the herpetologist who worked in Sri Lanka, seems to be quite clear that the snake in question was a python. It would seem that somehow a really tiny little snake (Ahaetulla pulverulenta - and that genus name is also derived from Sinhalese) known as Henakandaya in Sinhalese somehow got mixed up with tales of pythons which then grew into monstrous man-eaters in South America (and Hollywood).

Now there is a second tale here, the one that I really came here to tell, which is that one can research the Internet and find Wikipedia articles in quite a bad shape or worse, appearing to be in good shape and not being scholarly enough. The right thing then is not to blame the medium but to use it to make things easier for future seekers/researchers. Part of that is to recognize bad sources and the other part is to fix it and I just did my bit for today.