A few weeks ago I was looking at a clump of grass and spotted this little ant-like insect walking on a blade. When I stooped to take a closer look, it leaped and I knew immediately that this was something to check carefully. After a little bit of searching I found it not far away and, with absolutely no hesitation, I was able to put a species identification to it - it had to be Formiscurra indicus. I had seen pictures of it at the entrance to the lab of Professor C.A. Viraktamath, a specialist on the oriental Cicadellidae and one of the two authors who described (i.e. taxonomically described and named the species) this species, at the University of Agricultural Sciences in Bangalore. This remarkable insect is a Caliscelid hopper and this is the male. The female looks quite different and fits the description brought to mind by the name of "piglet bug", a generic name used for many other members of the family. Male-limited mimicry is rather rare, indeed it is not entirely clear if there is a real value to the ant-like appearance. Females being vital to the survival of offspring are more often selected for mimetic resemblances that make them harder for predators to find or cause predators to avoid them. I decided to put together whatever little was known about this species on Wikipedia and for the first time also created a little DYK (Do-you-know) entry which appeared on the main page of Wikipedia. It was quite remarkable in that it led to ~3000 views and some interesting questions were raised on the talk page. One question was about why this species was described only in 2011 although specimens had been collected at least since 1976 and that too right within the limits of Bangalore city, a major science hub. The species seems to have a wide distribution and is probably not restricted to dry habitats as suggested in the original description paper. A few months ago, another male leaped away before I could make any careful observation at Moolehole on the Karnataka-Kerala border inside fairly dense moist-deciduous forest.

Hopefully some enlightened and more qualified entomologists will take the hint and decide to contribute to Wikipedia - the kind of outreach potential it has clearly beats the readership that an average scientific paper gets. I am quite sure that a good and accessible article will lead to greater readership of the more technical literature too. This article published by The Guardian last year undoubtedly caught attention, but it does not introduce the reader to the original work in the journal and I think a part of science communication should be about getting people to see the process by which knowledge is organized. Wikipedia cannot be that difficult to contribute to for anyone involved in science. I am happy to help anyone get started in adding to a major research resource. Maybe someone needs to write a "Why entomologists should embrace and contribute to Wikipedia" too. 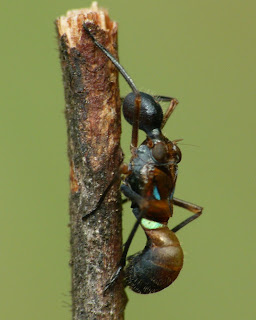 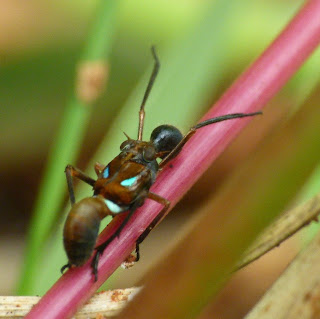 For the photo of a shrivelled specimen see the one in the Guardian. And here are some older posts on spiders looking like ants and another ant-like bug.
Posted by Shyamal L. at 4:18 PM