I was recently reading up the life of Reginald Ernest Moreau. A fascinating figure in the history of ornithology who started his life as an accountant who moved to Africa and began to study birds. His ability to pick up languages such as Arabic allowed him to go where other westerners did not dare to. He made many outdoor expeditions around where he worked in Egypt and in the process learnt about the bird life and more importantly bumped into interesting people. On one trip he found a lady picking flowers and found that she also knew quite a bit about the birds. She was soon to become his wife. On another trip in a far away wadi, he met C.B.Williams, "C.B." was a pioneering entomologist who worked in agriculture but took a great interest in quantitative approaches and was an associate of R A Fisher (sometimes known as the father of statistics). He was keenly interested in insect migration and was always looking at ways to collate and find patterns in numbers. He and Moreau made a few trips together around Egypt and Moreau learnt about CB's methods. More importantly when CB was posted in Tanganyika (now Tanzania), he worked out a way for getting himself an accountant that was interested in science - and he got Moreau out of the desert and into the rain-forest. Here Moreau, who notes in an autobiographical note that was published as his obituary, discovered someone who could make up for his poor eyesight and field ability. It was an African assistant named Salimu who further trained some more field assistant and together they began to collect field observations on bird life, particularly their time of breeding, their feeding and other behaviours. They collected quite a pile of data and putting it all together many years later, Moreau pioneered the field of life-history studies in ornithology. His work attracted the attention of David Lack and this led to debates on good-for-the-species ideas of adaptation versus good-for-the-individual concepts. Today that has further been distilled into what we have as the "selfish-gene" concept. It is interesting that one of the lesser-known Indian ornithologists, F. N. Betts was influenced by Moreau. The extent and nature of the influence is as yet unknown.

CB who influenced Moreau in the first place was interested in a range of topics, species area curves, diversity-population and other related issues. Like most others who look at such data he began to notice the ubiquity of logarithmic distributions in nature. "The Statistical Outlook in Relation to Ecology" (1954) - an extremely readable transcription of a talk that CB gave and something that every biologist will find of interest.

He makes numerous observations on distributions in nature and how they are often not normal (or Gaussian):

A particularly interesting form of distribution is when all the errors are in one direction. This is found, for example, in the study of phenology when a number of observers are recording the first appearance of a bird in a particular district. It is not possible to see the bird before it arrives, but it is possible to miss seeing it for several days after the arrival. Thus the actual day of arrival of the bird that we are trying to determine is not near the average of the observations but is at, or previous to, the earliest of the records. There is even another complexity in this problem, as a bird such as the cuckoo, which is easily recognized by sound, is less easily overlooked than a bird, such as the swallow, which has to be seen to be recorded.

As another example he takes the distribution of lice on the heads of 461 people. Finding a logarithmic relation he was able to make predictions about how many heads should have just one louse and found it was 107 although the actual value found was 106. He joked that Nature was only one wrong ! 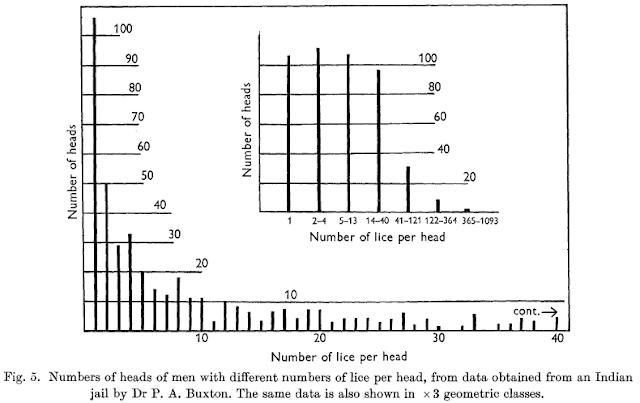 He ends the lecture : "Perhaps I may conclude by saying that the application of statistical methods to biological subjects is still in its infancy-and no doubt as many mistakes will be made by this as by any other approach. But let us go ahead, for: 'He who never makes a mistake never makes anything.'"

I was curious about the data set of the lice and examining the original found that this study was possible thanks to 1437 inmates of the Cannanore - Kannur jail. Apparently a method was found to easily separate lice from hair samples and the heads of the 1437 had been carefully tonsured under the supervision of Major P. V. Karamchandani. The hair masses of each prisoner was measured and a number of other data about persons from which it came such as religion and age were collected.

"...Mr S. Smith who performed all the routine of weighing, dissolving hair and counting lice, and Miss V. E. Buxton and Miss F. R. Mold who have carried out the tabulating."

There are perhaps more lessons to be learnt in these, one of these being the amazing amount of inter-disciplinary interaction and indeed a complete disregard for educational backgrounds and a from-scratch approach to research. Perhaps the isolation from mainstream academia in the wilds of Africa did help.
Posted by Shyamal L. at 11:31 AM