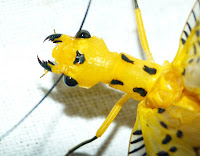 It is not everyday that one comes across an order of insects that one has never seen before. Staring at the insects that had been attracted to light, it was immediately evident that the large and weak flying piece of colourful plastic was a Corydalid. Formerly included in the Neuroptera along with dragonflies and damselflies, it has since been placed in an order of its own, the Megaloptera. 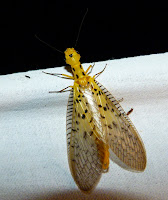 The ancestral Megalopterans flew in a world with perhaps a single continent. The oldest trace of the group is of a fossil of a larva found in Mongolia from the Middle Jurassic. The origins of the group have been estimated to date to around 251 million years ago. There are about 130 species today and some of the extinct ones must surely have been large and frightening. The jaws still evoke awe. Their larvae are very active and a name used for them is "hellgrammite". No one quite knows the etymology of that name or for Dobsonfly, the name used for adults.

I had never heard of a Corydalid from the Western Ghats, however others had seen it before. The species we had before us was just being described formally. Another specimen from the exact same locality in which we saw it had been identified in the genus Nevromus (which apparently has priority over the spelling "Neuromus"). The species will soon receive a formal name.

"What's the use of their having names," the Gnat said, "if they won't answer to them?" "No use to them," said Alice, "but it's useful to the people that name them, I suppose. If not, why do they have names at all?"

The most useful thing about having a name is simply that it allows the compilation of multiple bits of information. That would require that the species lives on to observation in the wild and in the current instance, the very survival of the species is threatened.  We know nothing about the life-history of this species. For all we know, a small and restricted population could easily be eradicated by a bright light in the town. 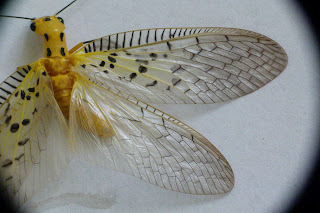 Corydalidae from the Indian region are mainly found along the Himalayas. Their larvae are active predators with a robust body and strong mandibles. Tufts of filaments arise from their abdominal segments and a pair of appendages at the end of the abdomen help it hold on to rocks in fast moving streams. The larvae are believed to be intolerant to pollution and they need fast flowing and well aerated waters. Their life span is exceptional, taking three to four years the larvae emerge into the adult form that we see here. The adults live for just a couple of days, often without feeding with the sole purpose of mating. These habits suggest that that the species may already be on the edge. The Western Ghats hold the last major forests and water sources in the peninsula of India. Made up by upthrust strata exposing deep layers of the earth, it is an area that is being torn apart in the quest of ores. Mining companies will pay any price to support political parties that can turn a blind eye to the numerous laws that are meant to protect the environment and the interests of local people. After millions of years of survival, this species is threatened not by continental upheavals and volcanoes but by the greed of a few representatives who need money to rule the land and its people; and ironically all of us who, trapped by the little luxuries doled out, cannot question that system.

Postscript (September 2012)
The species is Nevromus austroindicus  Liu & Viraktamath, 2012 - the description is in: Xing Yue Liu, Fumio Hayashi, Chandra A. Viraktamath and Ding Yang (2012) Systematics and biogeography of the dobsonfly genus Nevromus Rambur (Megaloptera: Corydalidae: Corydalinae) from the Oriental realm. Systematic Entomology 37: 657–669.
Posted by Shyamal L. at 12:27 AM