I recently came across the works of Miss Maude Lina West Cleghorn and was surprised by the breadth of her entomology research conducted in Calcutta. Miss Cleghorn actively studied insect pollination as an amateur and apparently some government-supported studies on the genetics of voltinism in silkworm in the early 1900s. Remarkably little is known of her despite being a Fellow of the (Royal) Entomological Society, the Linnean Society and the Zoological Society of London. Enquiries with the Linnean Society reveal that she was elected Fellow on the 4th of December 1913, nominated by Isaac Henry Burkill (director of the Botanic Gardens at Singapore); David Hooper (economic botanist with the Botanical Survey of India) and Lawrence Lewton-Brain (director of agriculture, Federated Malay States). Her address was given as 57, Ballygunge Circular Road, Calcutta and a bit before that period at 12, Alipore Road. All that can be found is that she died in 1946 - a single line mentioning her death (as Associate Member - a class created in 1835 which according to the byelaws- "Associate Members shall be persons well known for their literary or scientific attainments, but who are not likely to apply to become Ordinary Members.") is found in the Journal of the Asiatic Society of Bengal for 1949.

Among Miss Cleghorn's studies is one on the longevity of insects, specifically silkworm. She notes in passing that a  Hypolimnas bolina lived for 92 days but she examines the lengths to which the moths live based on the season in which the pupae eclose. The graphs are very elegant summaries of her findings (Edward Tufte would admire the simple lines rather than broad bars). 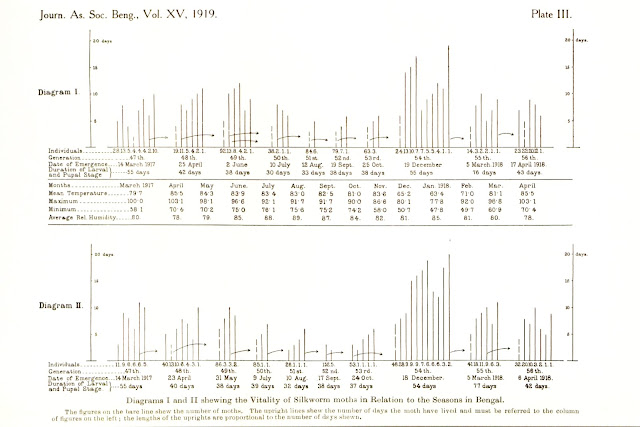 She also studied insect-pollination in some detail and especially interesting is her description of trap pollination in two species of Araceae. The first study was in 1913 on Colocasia (Kachu) and she described how cross pollination was enforced by a combination of protogyny by the flower and the timing with which the flower trapped and released carrion flies. She followed up this with a study the next year on Typhonium trilobatum (and she uses the local name Ghet-Khechu!), a member of the Araceae which has a spadix that releases a strong smell of rotting carrion in the evening and keeps the beetles overnight inside the cavity formed by the spathe. It attracts beetles including those in the Coprinae (Scarabaeidae) - and two species are identified Onthophagus tarandus and Caccobius dimiunitivus - the voucher specimens from these flowers were deposited in the Pusa collection and these life-history notes are included with some care in the Fauna of British India (Arrow, Gilbert John (1931) The Fauna of British India. Coleoptera Lammelicornia. Part III (Coprinae). London: Taylor and Francis. pp. 143-144, 181-182.) 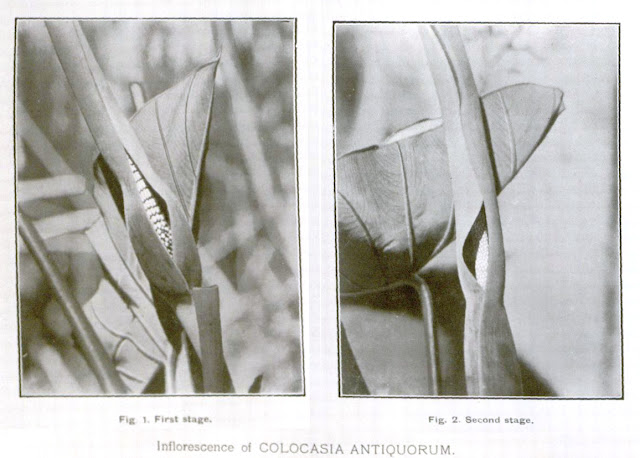 Burkill, the nominator of Cleghorn for Fellow of the Linnean Society, has a very interesting review of pollination mechanisms in Indian plants and he seconds Cleghorn's observations.

She seems to have maintained an interest in floral biology and pollination for long and her last publication appears to be in 1922 when she wrote on the floral biology of the Mahua (Madhuca longifolia) and noted that it is quite unique and how contemporary botany texts missed out its details. She notes that contrary to some illustrations, the Mahua flower never opens up. She notes that (emphasis mine) - "the mechanism found ... in which a large portion of the actual flower is edible is a rather costly and uncertain one...and appears to be rare among plants. The only other plant with this type of mechanism, recorded so far, is Fracinclea, a pandanus-like plant of Java, which is pollinated by bats while visiting the flowers for the edible bracts." She observed flowers using field-glasses and drew diagrams to demonstrate how the pollen were dispersed through a pore on the side of the otherwise closed bud-like or berry-like flower. The pollen collects inside the closed corolla cup of the hanging flowers in the initial stage and bats going to feed on them get the underside of their wings dusted with pollen. As the flower matures the anthers wither and the corolla becomes fleshy and the stigma becomes receptive. Once the corolla is eaten the stigma is exposed and the bats deposit pollen on them. This aging mechanism ensures cross-pollination.

It seems likely from the names listed in the pages of the Journal that some of Miss Cleghorn's relatives attended the monthly meetings of the Asiatic Society of Bengal. Cleghorn also took an interest in other taxa, there is a mention of her maintaining a live Kaloula pulchra. Harold Maxwell-Lefroy (Imperial Entomologist) in 1916 notes that Miss Cleghorn was to be offered the work on cross-breeding silkworm. It appears that from 1910, "it was decided to prepare a scheme to employ Miss Cleghorn". A visit to Pusa is noted. It seems that she worked on cross-breeding European silkworm which produced high quality silk and produced just one generation a year (univoltine) and Indian varieties that produced multiple generations in a year (multi/polyvoltine) but coarser silk. Cleghorn conducted a series of breeding experiments to examine the heritability of multivoltinism and her conclusion was that multivoltinism was a dominant trait in females but recessive in males.

There is a mention of a Mr J(ames?). Cleghorn, an executive engineer at Cuttack who curiously was engaged in sericulture research. According to a Memorandum by a certain Liotard : "In Cuttack, sericulture has been carried out as an experiment since 1877 at Government expense, under the supervision of the Executive Engineer of the Mahanadi Division." and there is a comment by Mukerji, N.G. in his 1903 A monograph on the silk fabrics of Bengal-:


The reference here is no doubt to the experiments of Mr. J. Cleghorn of the Public Works Department. Mr. Cleghorn's experiments were not altogether fruitless. He published his studies of the life-history of the parasitic fly, and brought to light the great destruction caused by it. He produced some valuable races of beautifully white cocoons, both annual and poly vol tine. He also claimed to have discovered a simple means of avoiding or destroying the fly-pest. But as he could not be induced to part with his secret for less than a lakh of rupees, nothing is known with regard to his method of coping with one of the chief enemies of sericulture in Bengal. The fine races of cocoons he was rearing in conjunction with the Secretary of the Agri-Horticultural Society were not given out to the world either, and Mr. Cleghorn's researches and experiments have, therefore, left little of practical value behind.

The fly mentioned here is of course Exorista bombycis (Tachinidae) and I wonder if this might be Miss Cleghorn's father, perhaps a clever but money-minded man.


Hopefully someone in a better position to research her life will do justice to this very observant and insightful amateur entomologist whose contributions to pollination biology are almost unknown. I bumped into this remarkable and little-known researcher while looking up on Hugh Cleghorn - one of the pioneers of forestry in India- on whom a most comprehensive biography has just been published by Henry Noltie.

Thanks are due to Lynda Brooks at the Linnean Society for tracking down some details and to Ann Sylph at the Zoological Society of London for checking their archives.

Crowdsourced Indian geology in the 1800s

Crowd might be a bit of a stretch for less than a hundred contributors but George Bellas Greenough (1778 – 1855), one of the founders of the Geological Society of London produced the first geological map of India which was posthumously published in 1855. Greenough was the first president of the Geological Society of London and was reportedly best known for his ability to compile and synthesize the works of others and his annual addresses to the Society were apparently much appreciated. He was however entirely against the idea that fossils could be used to differentiate strata and in that he failed to admire William "Strata" Smith who produced the first geological map of England. One obituarist noted that Greenough was an outspoken critic of theoretical frameworks and a "drag" on the progress of the science of geology!

Not much has been written about the history of the making of the Greenough map of Indian geology - it was begun somewhere in 1853 and was finally published in 1855 and consisted of four sheets and measured 7 by 5¾ foot. A small number of copies were made which are apparently collector items but hardly any are available online for anyone wishing to study the contents. The University of Minnesota has a set of scanned copies of three-fourths of the map but if you want to read it you need to download three large files (each of about 300 MB!) . I decided to stitch together these images and to enhance them a bit and since the image is legally in the public domain (ie. copyright expired), I have placed it on Wikimedia Commons. There really is a research need for examining the motivations for making this map and on how Greenough went about to produce it. He apparently had officers of the East India Company providing him information and he seems to have sent draft maps on which they commented. There is a very interesting compilation of the correspondence that went into the making of this map. It has numerous errors both in geology as well as in the positions and labelling but is definitely something to admire for its period. Thomas Oldham representing the professional GSI in India was particularly critical while heading a committee (that included Henry "Cyclone" Piddington) to examine the map.

On has to lament that nobody has made a nice geological map subsequently that shows interesting regional formations, fossil localities and so on. So much for our human-centricity and recentism.

Here is a small overview of the 1855 map. You can find and download the whole image on Wikimedia Commons. 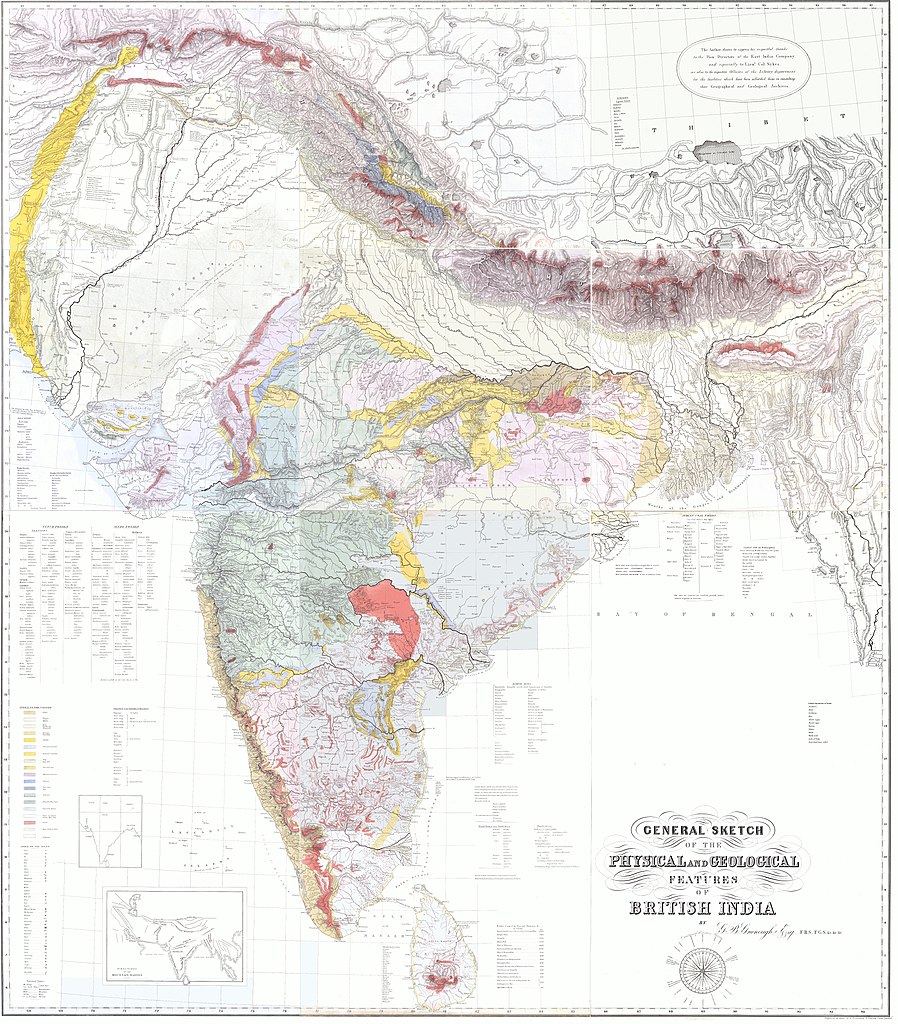 You can zoom into this image and enjoy the details by using this viewer that uses the Flash plugin or this one that is Flash-free.
An even higher resolution stitch can be found here (with the zoom-viewer here)


PS: November 8, 2016 - just created an entry in Wikipedia for Henry Wesley Voysey (with the only known portrait of the man when no likeness has been recorded by the Oxford Dictionary of National Biography!) who is wrongly claimed by D T Moore to have made the first geology map of India - covering a part of the Hyderabad region (1821) but the two known copies of that map disappeared from Calcutta and London. An older geology map is by Benjamin Heyne published in 1814.

April 11, 2018 - thanks to David G. Bate, there is now a complete map in the French digital library. The above image is now complete.
Posted by Shyamal L. at 1:27 PM 2 comments: