A chance enquiry from Richard Conniff on some Lepcha collectors for his website for fallen naturalists led me to some very interesting tit-bits and as usual, I was surprised by the paucity of local interest and research. Not having had the good fortune of exploring the richness of north-eastern India (except for a short trip in Bhutan) it was hard to feel grounded with sufficient local context but reading through some of the available bits makes it clear that that so much local knowledge has been squandered in recent times. Hopefully someone based in Sikkim or nearby can make amends with a more detailed study.

The Gazetteer of Sikhim (1894) has an excellent introduction to ethnic and biological diversity. It includes a list of birds along with Lepcha names. It also has bits of local bio-lore such as notes on birds of good and ill omen. The sections on butterflies was written by J. Gammie and Lionel de Niceville while the one on birds was by L.A.Waddell. Wadell writes while dealing with the birds:

The Pahariyas, speaking a Sanskritic dialect- the Parbatiya, and the Bhotiyas, including the Tibetans are much less discriminating in their bird-names than the Lepchas, who are "born naturalists";  - [1894. The Gazetteer of Sikhim. p. 202.]

Altogether the Lepcha is a very different sort of companion in the jungle from the Indian who knows and cares nothing about flowers, nor animals - except those that he eats or that eat him. - Laurence Waddell (1900) Among the Himalayas. p. 79.

The butterfly section in the Gazetteer by Niceville makes a tantalizing statement but sadly, he does not actually list the Lepcha names for butterflies (unlike Waddell who does include names for birds):

It might be noted that the Lepcha collectors of Sikhim are most skilful, and would compare favourably with those of any country in the world: they are the only race in Hindostan who have names for the different species of butterflies. - [1894. The Gazetteer of Sikhim. p. 115.]

Mycalesis (Pachama) mestra, Hewitson. Has frequently been brought into Darjeeling from the neighbourhood of Buxa in Bhutan by the Lepcha collectors employed by Messrs. Otto and F.A. Moller, A.V.Knygett and G.C.Dudgeon. -[1894. The Gazetteer of Sikhim. p. 121.]

H.J. Elwes was another user of Lepcha guides. It would appear that he first got to know of them via James Alexander Gammie who ran the cinchona plantations in Darjeeling. Elwes' obituary includes a note from Gammie: "The Lepchas are born naturalists, who know by distinctive names nearly all plant, beasts, and birds, and the more conspicuous insects. Elwes, by his personal magnetism and knowledge of Hindustani, in which he talked with them, gained their confidence to a remarkable degree, and they always remembered him as the 'great captain sahib.'" It turns out that Lepcha butterfly collectors went far from their traditional grounds.

In 1893 and 1894 Mr de Niceville induced three amateur collectors in British India to send down to Sumatra some of the well-known Lepcha collectors from Darjiling to Dr Martin's care. These men met with very good success, though at first they were afraid to mix with the cannibal Battaks, and refused to go to the mountains. However, after giving them a Battak guide and interpreter, they went off to the hills regularly, and did very well there. - [Anon. (1896) Reviews and notices of book. The Butterflies of Sumatra. The Entomologist's Record and Journal of Variation 8(1):22-24.]

And some of them perished in their travels (the original enquiry) and the only person to have taken some trouble to document the Lepcha collectors has been C.F.Cowan. In his 1967 note in the Journal of the Bombay Natural History Society he finds some information on the collectors of William Doherty, the famous butterfly collector. When Doherty fell ill in Africa, his Lepcha assistants carried him to the hospital in Nairobi. Doherty wrote to Elwes: "I had to go to Darjeeling for my Lepchas and got two fairly good men: I have also two other men... and hope to keep them permanently." He had his Lepchas climb hills, "Each of my men used to take a peak and stay there all day". One collector, Pambu, made treetop platforms and stayed on them all day. Doherty took some of his collectors to Java and in his letters to Ernst Hartert mentions Chedi and Tungkyitbo (who died at sea). It seems that some of the collectors stayed on in the Malay peninsula and worked for other collectors like Oberthur. These include Lakatt and Pamboo. Lakatt returned to Calcutta in 1895. Pambu unfortunately did not make it and was "murdered by savages" on Japen Island, Geelving Bay, West Irian in 1898. Cowan notes:

So passed Pambu, working some 5000 miles from home. We can picture him a dedicated and enterprising naturalist, a faithful and cheerful companion and a staunch and steady friend.
Lakatt's name has been commemorated in butterfly nomenclature by the Lycaenid Jamides zebra lakatti Corbet, 1940 (Proc. R. ent. Soc. London (B) 9:2). It is hoped shortly to give Pambu similar recognition.

Lepcha bird trappers find a mention in Mackintosh's  Birds of Darjeeling (1915) - with a comment on Lepchas imitating the call of Glaucidium brodiei to lure small passerines.

Lepcha collectors were in demand among the botanists as well. They not only found the plants but processed them into herbarium sheets (Lepcha boxes of butterfly specimens are also mentioned).

Mr Cave of the Loyd Botanic Gardent at Darjiling, who provided an admirable Lepcha collector always active and good-tempered, and helped me to find my way among so many genera that were strange.  [Lacaita, C.C. (1916) Plants collected in Sikkim, including the Kalimpong District, April 8th to May 9th, 1913. Botanical Journal of the Linnean Society 43:457-492.] 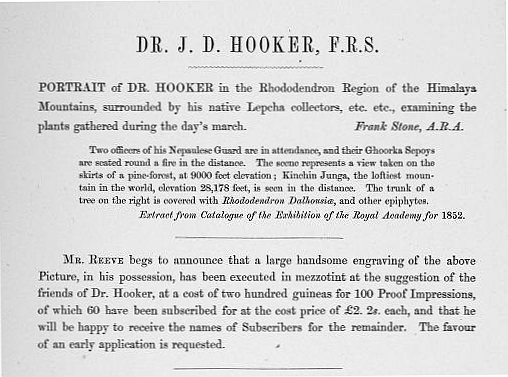 Hooker, in his introduction to the work of J.F.Cathcart, an amateur botanist notes:

He had already established a corps of Lepcha collectors, who scoured the neighbouring forests, descending to 2000 feet, and ascending to 8000 bringing every plant that was to be found in flower; and in his house were two artists busily at work. He told me his plans, and invited my co-operation ; he intended to procure more artists, the best that could be obtained, from Calcutta, especially those skilled ones, who had been trained under Wallich and Griffith in the Botanic Garden, and to draw every plant of interest that he or I could procure. Knowing that a Flora of the Himalaya was a work which I contemplated, he most liberally offered me the use of all the drawings on my return to England, and expressed a wish that I should direct his artists to the plants best worth figuring, and instruct them in perspective, and in drawing the microscopic details, the points in which native artists are mainly deficient. -[J. D. Hooker in his introduction to J.F. Cathcart's - Illustrations of Himalayan Plants (1855) ]

Hooker's collectors maintained careful accounts written in the Lepcha script of which there is an interesting description from the Kew archives. [Sprigg, R.K. (1983) Hooker's Expenses in Sikkim: An Early Lepcha Text. Bulletin of the School of Oriental and African Studies. 46(2):305-325.]

George King of the Calcutta botanical garden also used Lepcha collectors and we find mention of the names of Dungboo  and Dotho.

The tradition seems to have continued at least till the late 1920s for we find mention of Rohmoo pictured at the head of this article. Rohmoo worked along with another collector Ribu for several botanists in the Botanical Survey of India and the Lloyd Botanical Garden at Darjeeling. He collected for several botanical expeditions in Sikkim including those of William Wright Smith, George H. Cave and Roland Edgar Cooper. Poa rohmooana was named after him by Henry Noltie in his Flora of Bhutan.

A statement by H.H.Risley (the physical anthropologist) in the introduction to the Gazetteer is particularly striking:

The Lepchas alone seem to doubt whether life is worth living under the shadow of advancing civilisation, and there can, we fear, be little question that this interesting and attractive race will soon go the way of the forest which they believe to be their original home.


A similar pessimistic outlook is expressed by Florence Donaldson in her book Lepcha land, or Six weeks in the Sikhim Himalayas (1900).

Current events... are likely to open the flood-gates of Western civilization. But when this comes to pass, "Lepcha Land" will be a misnomer, and another primitive, patriarchal and peace-loving people will have died out.


On the way, I passed through several flourishing settlements of the Lepchas. The families averaged four to five children, and several numbered seven or eight; so that the current statement that this race is dying out through sheer inanition is scarcely correct. The real reason for their disappearance in British Sikhim, is the disappearance of "conservation" of their forests, which by cutting off in great measure their sources of food, forces them into the unreserved tracts of Bhotan and Nepal.


PS: It turns out that some researchers have tried some very interesting experiments, using Lepchas to monitor bird species.