Bird art from the past


"...It must also be remembered that, while Gould himself was a skilled craftsman, many of the books that bear his name were illustrated by others, including H.C. Richter, Edward Lear and Joseph Wolf. Indeed, some would regard the last-named as the greatest bird illustrator, particularly in his birds of prey, which combine accuracy with power. One must, I think, qualify this statement by 'of the western world', because the bird paintings from India and China surpass anything that the West has yet produced, and only these, perhaps, come in the category of great art."

India? Well, I suspected for long that Lack got this wrong. China? One can certainly find support for some truly artistic works from this region. The only major bird art from India that can even be considered in comparisons with the likes of Joseph Wolf are from the Mughal period. There are very few works of quality (at least as far as someone with very limited means for research can see) from the pre-Mughal period in India. The lack of good media as well as archival means that even if good works were made, few are preserved for us to examine. In an earlier post we saw some 30000 year old rock paintings from near Bhopal depicting large birds which are more likely to be floricans than ostriches as has been claimed by archaeologists.
From what is available, one has to accept that the oldest and best depictions of birds have to be the ones from Egypt. The famed Meidum geese are truly a spectacle. The detail of serrations on the mandibles and the general stance are remarkable for 2500 BC. (Alfred Newton in his classic dictionary of birds notes it almost in his second page on the history of ornithology!)
The pair facing right are Red-breasted Geese, Branta ruficollis, and the pair facing left are Greater White-fronted Geese, Anser albifrons. The outer birds have been thought to be Bean Geese (Anser fabalis) although some have suggested that they could be Greylag Geese.

The Egyptians used paint on limestone and rock very effectively and the results have lasted long. There are several wonderful examples of Egyptian art available online via the Metropolitan Museum of Art.


The Egyptians looked very carefully at their falcons and vultures too. They had reduced, symbolic versions that were part of their hieroglyphics. They seem to have done well in their understanding of feather arrangement, something that Joseph Wolf had taken great care of unlike some earlier bird artists in Europe.


The falcons show feather patterning which is very artistic and reasonably accurate. It seems like later works in Egypt were not as well preserved. If they did paint on papyrus, it seems like it was not preserved.

The Chinese and Japanese found a medium that allows for more delicate depictions. They used ink on silk and paper and these are perhaps what Lack refers to in his review. Bird art from this region, from a later age though, is beautifully composed with artistic landscape backgrounds and elements of the environment. Contrast enhancing techniques are used in the way they set their mountains from the skies and white birds like egrets from the background. They also make careful choices in their use of unpainted areas. (artists will be interested in this guide to brush-painting technique)

Now let us examine some of the older Indian bird portrayals. Most of the early art belongs to the Buddhist school. These included semi-mythical birds such as the hamsa which the Buddhists clearly identify with the goose (probably the Bar-headed Goose) unlike some Indian scholars who seem to feel better about calling it, however improbable it could be, a swan. Ornate renditions of the hamsa are found in 6th century China as well as in the cave paintings at Ajanta.

An ornate hamsa (See also this ornate goose at the Metropolitan Museum) is found in Cave 1 at Ajanta (sketched by James Burgess here). One can see the horses and elephants depicted with a level of naturalism that far exceeds that of the birds.
A fresco inside cave 17 at Ajanta depicting Mahahamsa jataka or the tale of the golden king goose also has a stylized goose rendition. These birds are of course talking ones! 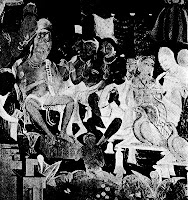 The carvings on the gate at Sanchi show a parrot like bird which has been interpreted as an early version of garuda. Cave 17 at Ajanta also has some garuda, with a combination of bird and human traits and it is interesting that it almost retains the same name, karura, in Japanese Buddhism of the 8th Century.
There is little by way of evidence of later bird art until the arrival of the Mughals. The idea of scribes maintaining journals for the Mughal rulers was itself an innovation and the introduction of illustration to capture scenes from daily life was something that historians would have liked others to do. Lots of collections of Mughal paintings have been made, and many have resulted in coffee table books. Salim Ali traced his ancestry to the Mughals and wrote a multi-part essay on Mughal natural history.

If Lack was appreciating Indian bird art, it has to belong to the Ustad Mansur school that worked for Jahangir. Mansur is most well known for his depictions of the dodo and Siberian crane. Others  like Shaikh Zain ud-Din painted for wealthy English patrons and the most famous collection is that of Lady Impey (of Impeyan pheasant or Monal fame), wife of Elijah Impey of the Calcutta court. This collection has some spectacular images of the Pink-headed Duck and Black-necked Stork that are painted from living specimens. They lack the sense of depth produced by shading techniques that the Chinese had mastered long before.
The lack of a good historical and technical account on art in other periods stands out. A lot has been written about Mughal and Rajput art techniques but it seems like not enough mention has been made about some better art from southern India. A 1595 sample of art from Bijapur(?) (reprinted in Beach, 1992) seems to show better technique in shading. Basawan was an artist in Akbar's court. Although this does not depict birds, it suggests that there must be more interesting works languishing in collections around the world.
We have already seen in another post that T. C. Jerdon (of Jerdon's Courser fame) hired Indian artists to produce bird pictures for him. From a few other sources we know that he (or perhaps his wife Flora, who was a bit of an artist) trained traditional Indian artists to help him. Very little is known about their talc paintings or the antiquity of this form.

PS: If you have seen any exemplary Indian bird art from the pre-Moghul period, please do let me know.
In August 2014, I had an opportunity to examine the work of Hodgson's artist and for the 1850s, truly spectacular - see my post on it.