The hidden world of the crouching tiger-beetles

Tiger beetles are an iconic group for many entomologists and ecologists. They have been considered to be a good surrogate group for use in biodiversity studies. They are perhaps not as good as the more ecologically dominant ants, but are certainly full of character and action. To add to that, most of them can be found on open paths, saving the need to dash through vegetation and load oneself with ticks. Unfortunately, nobody has quite made an illustrated fieldguide for the Indian region despite the ease of making one especially for someone with access to a good collection. Perhaps the museums have not been welcoming to anyone who might be motivated. A major reference for the Indian region is by R. Acciavatti and David Pearson (Acciavatti, R.E.; Pearson, D.L. 1989: The tiger beetle genus Cicindela (Coleoptera, Insecta) from the Indian subcontinent. Annals of Carnegie Museum, 58).


A somewhat less studied aspect of tiger beetles is the production and hearing of ultrasound. Some years ago I went out on a bat-watching outing with the Norwegian Zoological Society to a lake to the east of Oslo. Equipped with bat-detectors, we were able to hear more bats than we could see. It is simply fascinating when a world that our senses do not detect is suddenly made perceptible. I think this is the fundamental allure of photography (showing detail we may not spot), microscopes, binoculars, ultrasound detectors, DNA sequencers and a most other instrumentation. Anyway, I would love to hold a sensitive bat-detector up close to these critters.

Cicindelids apparently hear ultrasound using two "ears" on the dorsal side of the first abdominal segment. They respond to bat pulses with escape behaviour and also produce ultrasound at around 30–35 kHz in non-defensive contexts, perhaps for communication. According to one study the production of ultrasound in flight is possibly through a mechanism that involves the elytra and wings. I however wonder if they may be producing other sounds through mandibular stridulation, when not flying. They often seem to gnash their jaws, mandibles crossing over each other and perhaps the micro-structure of the flat mandibular surface will have something to reveal. Someday hopefully we can hear these beetles, who knows they might even be detected and identified by their sounds.

A feature that makes tiger beetles particularly interesting for those interested in electronic field guides is their patterning. It would appear as if there was a fairly simple archetypal "bodyplan" (what the Germans called Bauplan, but often avoided because of an implicit idea of "design"). An archetypal plan is however possible without any fear of "intelligent design" if one considers that patterns are coded by sections of genetic code, modules of which are shuffled about during the evolution of species. An amazingly old (1917) work on this is by Shelford and he identifies patterns of colour and provides some interesting insights into developmental biology. By subjecting larvae and pupae to specific environmental conditions of temperature and humidity he was able to alter the patterns that form on the elytra of the adults.

Inspired by Shelford, I attempted to look at the patterns on some Indian species. It is however very difficult to see much without access to museums or other collections.

Most of the photos were taken on field trips either accompanied or made possible by Dr. Revanna S. Revannavar, entomologist at the University of Horticultural Sciences, Mudigere.
.
References

Postscript
Would be terrific if someone can come up with a low-cost ultrasound monitoring instrumentation in India - based on ideas such as this. Would be very happy to help in field testing for any electronic whizzes out there that might be interested.

Bird fossils from the Indian Subcontinent

I normally desist from the archaic practice of listing things within meaningless political delineations but a need to locate information on bird (and near-bird) fossils and ichnotaxa from the Indian region led me to the discovery that there are no readily available reviews. This is a rather rough working index of taxa and sources. Additions are welcome.
Postscript: 8-May-2013

In going through an article by Badam (2005) I came across reproductions of a couple of rock drawings from Kathotia and Firengi south of Bhopal. These have apparently been attributed with some doubt to ostriches by paleographers. The illustration from Firengi is pretty poor for a match with an ostrich and on the other hand is a very good match to a Lesser Florican particularly in the fluffy neck and the two plumes exaggerated on the back. I agree with the authors about the inaccuracy in the detail of feet.

Postscript (24 Dec 2013): An exhibition on rock art at the National Gallery of Modern Art in Bangalore included a photograph of the Kathotia bird and it is clear that Badam's sketch is an oversimplification. 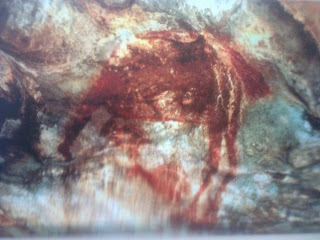