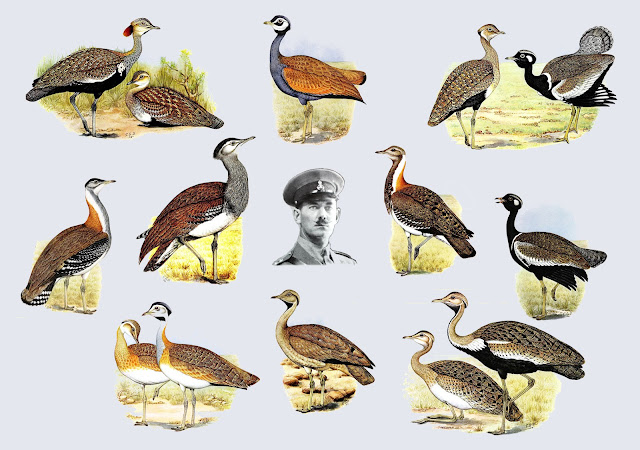 One of the hazards of contributing to Wikipedia is that one does not read enough of what is on it. Bumping into a series of interesting paintings of South African birds I looked up the artist marked as Sergeant C. G. Davies. Turns out that he was Claude Gibney Finch-Davies, a somewhat lesser known artist. Born in Delhi in 1875 he went to England and joined the army in South Africa. Somewhere along the line he picked up an interest in birds and art. A couple of biographies have been written about him by A C Kemp, but it would seem like he has largely been unknown, partly due to something he did that blemished his career and led perhaps to his death/suicide. His keen interest in illustration led him to remove plates from books in the museums and libraries that he referred to. Today there are probably art collectors who must be eager to steal this man's paintings.

The Natural History Museum at London holds some of his unpublished notebooks and paintings. Fortunately for us his paintings are out of copyright since 70 years have passed since his untimely death. Some of his paintings can be found here on Wikimedia Commons
http://commons.wikimedia.org/wiki/Category:Claude_Gibney_Finch-Davies

His biography on Wikipedia is interesting but some of the details seem to be untraceable - it says [emphasis mine]:

He was born in Delhi, India, the third child and eldest son of Major-General Sir William and Lady Elizabeth B. Davies née Field. His father later became Governor of Delhi and was awarded the Order of the Star of India, while his mother was said to be an expert on Indian snakes.

The names of the mother and father are confirmed elsewhere as well. But it is odd that no further information is found on his father in the ODNB. Does anyone know further details and sources?