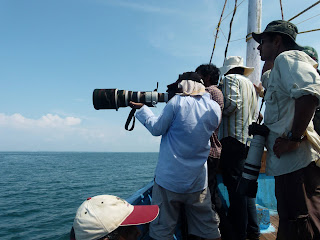 I recently joined a bunch of bird-photographers and birdwatchers who decided to hire a fishing boat out to sea to watch seabirds. The result was that we, at least I, got to see among others our first view of one of the world's most abundant birds - Wilson's Storm Petrel (some amazing photographs on the Wikipedia article contributed there by Nanda Ramesh) The bird books for the Indian region seem to be completely off mark with information on the sea birds. It seems like a number of birds that are considered extremely rare are actually quite common at least seasonally. The problem of course is that the vast majority that are interested in birds are employed in the cities and are trying to learn more by making a trip here and there, now and then, while the ones who can be doing that best in those locations, the fishermen, have never been recruited into this business of knowing-science.
Anyway, it was a great experience being in the open with a 360 degree unobstructed view of the horizon, silence, colourful sunrise and sunset; and various sea denizens. Masses of pulsating jellyfish, the beauty of which could not be captured easily (I am not sure if there is any aquarium in India that displays their beauty like they do at the Monterey Bay aquarium), many sea snakes (mainly in the evening), and several sea birds. The gulls, terns and skuas all sat on floating debris allowing photographs that are truly sharp and detailed but anathema to photography purists. There were some lepidoptera flying in to the Indian peninsula from the West - some looked a bit like Melanitis and there were moths, a lacewing and several other insects such as the Pantala dragonflies flying about. Far out at sea at dawn, a Scotophilus bat flew from the west and finding some terra firma ("the more the firmer, the less the terror") in the form of our boat seemed to desperately look for a quiet corner where it went to sleep. It could have gone out on a large ship and then taken off to be lost at sea or who knows, in migration. It just seems like there is so much that nobody has ever bothered to learn about. There are of course heavily funded government departments and the ZSI who for sure run expeditions out here but what they learn or the quality of their work is not easy to discover unless someone is willing to go to court and spend time trying to straighten out governance, justice and all else. Anyway, I suspect that one could easily learn a lot more for a lot less if someone started a scheme to provide old digital cameras to some selected curious-minded fisherfolk to document what they see.
By some coincidence, I happened to read a semi-autobiographical account of Curtis Ebbesmeyer, titled Flotsametrics: How One Man's Obsession with Runaway Sneakers and Rubber Ducks Revolutionized Ocean Science (2009). A captivating book that one can especially appreciate if one saw Nandini milk sachets way out in the Arabian Sea. It deals with the study of ocean currents and the methods involved. A historical bit talks about the tracks taken by wooden objects dropped by Icelandic Vikings in a ancient tradition to establish the locations of their settlements. Ebbesmeyer worked on how the sea retained little patches of water without mixing and that included sewage from American coastal cities that would upwell far out at sea and apparently a lot of these phenomena had military applications and oceanography appears to have been well funded during the Cold War. Certain underwater density anomalies could apparently obscure sonars. The circular routes of certain currents results in some parts of the ocean becoming garbage patches for floating debris. Ebbesmeyer notes that the major garbage patches are in the centres of about eight of the eleven distinct gyres.

Ebbesmeyer also writes about his Japanese colleague Akira Okubo who applied mathematics to oceanic phenomena and then moved onto what started as a hobby study on the ecology of squirrel competition, something that resulted in a book on the application of the principles of diffusion in ecology (a new edition of the book should give some impression of its impact). It seems like such theoreticians tend to be little known and their work not easily grasped or appreciated. One of Akira's works was on the oceanic Halobates or sea striders - a relative of the water striders and one of the few insects that lives on the sea, a world where crustacea are more at home. I hope someone looks out for Halobates, one species of which is known from the Indian Ocean. A mitochondrial DNA based study on phylogeography notes that there is considerable isolation of gene flow inspite of the continuity of oceanic waters and the suggestion in Akira's paper that there would be considerable gene flow. Some petrel species feed on these sea striders.
A lot has been written about the Great Pacific Garbage patch, but there seems to be little done about what happens around India. What is the effect of effluents into the seas? We know how our rivers have been destroyed and one just hopes that the seas are managing our onslaught better.

On a different note, I was wondering about the advantages to seabirds using polystyrene perches. They appeared to prefer them. Perhaps there is an energy saving by choosing to stay dry. Strangely there appears to be little published on the topic (unless I have not got the right keywords for Google Scholar).

A pair of Wilson's Storm Petrels working over a patch of sea.
Posted by Shyamal L. at 11:44 AM 3 comments: